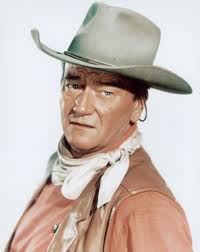 John Wayne - he knew the importance of shooting


Today's game was once again extremely underwhelming for Arsenal supporters. In the first-half we were lacklustre, apart from the last five minutes, while the second-half saw loads of possession, but not one single shot on target. It says it all for me that, for all the ball we had, Szcesny had far more to do than Petr Cech after half-time - I thought Szczesny was outstanding actually, doing the things that set apart a goalkeeper from a shot-stopper (the difference between a David Seaman and a Manuel Almunia, if you like).
The most frustrating aspect, and not for the first time, was our lack of interest in actually going for goal. I would have said you have more chance of scoring a goal if you actually try to do so. We've all seen Lampard's uncanny ability to score goals that take deflections, but one of the reasons for those deflections is his willingness to actually have a go. One of the only times Robin Van Persie had a shot in the second-half was the only occasion you wanted him to bring it down and beat his man. His decision to try and turn Cahill inside-out twice was infuriating, but his decision to try and play an impossible pass to Santos with things opening up for a left-foot strike on the edge o the box was plain criminal. Put that with his disgraceful miss from two yards in the first-half and it's fair to say Van Persie had a shocker. In fact he's been having a shocker for the past five or six games. I suspect this is the only blog where you'll read a word of criticism about the skipper today, but he certainly had the look of someone moving on this afternoon. It was a very Hleb/Flamini/Henry/Nasri/Fabregas (*delete as appropriate) kind of performance.
You can look at Van Persie's miss and Koscielny's header against the bar and maybe consider us slightly unfortunate. I don't believe we were. There was a lack of urgency, pace , ideas and effort in evidence yet again. It's no coincidence that if Song and Van Persie perform badly (as they both have in the last two games) then Arsenal struggle. Ramsey worked hard, but was caught on the ball far too often once again. Rosicky buzzed around and, along with Gibbs and Koscielny (who took his turn, after Djourou on Monday, to carry Thomas Vermaelen in defence) was our best outfield performer.
The substitutions once again defy any logic. I hope that Tomas Rosicky had a knock as to take him off seemed ludicrous. Diaby didn't too badly at all, but I would rather have seen Song or Ramsey taken off. Withdrawing Chamberlain to bring on a left-back just underlined how Wenger pre-ordains his changes - there was no way The Ox was getting through the ninety minutes today in almost any circumstances. Then we have the Walcott injury. For the second game in a row a player was sent back out by Colin Lewin and has made an injury worse. Walcott has a "serious" hamstring problem. As much as I don't rate him, and don't follow England, it would be cruel indeed for him to miss Euro 2012 as a result of the Club not protecting his injury properly. Also I should mention that it took Gervinho a full five minutes to get stripped and ready. That is not acceptable. If you're on the bench then you should simply have to slip off your tracksuit and get on the pitch. He was sat there putting on shin-pads and tie-ups and adjusting his boots etc for what seemed an age. In the meantime Theo tried to run and completely knackered his leg. Not good enough.
Newcastle's win puts Arsenal under genuine pressure for third place, though QPR beating Tottenham has been a real bonus. One point from six at home is not what you need at this stage of the season. A win on Monday would have made 0-0 today perfectly acceptable. We would have been pretty much secure for the top four now had we beaten Wigan. As it is we now must take at least seven points from our final three matches to be sure, in my view. Ordinarily a draw at Stoke would be fine, but we would be on a bad run if we fail to win next weekend. A defeat is unthinkable. Arsenal must find some form, and that probably means Song and RVP finding theirs.