Even the press have worked it out 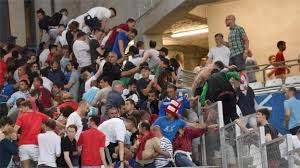 This could have been another Heysel

I'm starting to type as the Italy v Belgium game is about to kick-off so I have one eye on that while writing - I'm surprised to see Thomas Vermaelen getting a start for the Belgians. I didn't get to write last night as I originally planned. Having driven back from Dorset yesterday, after driving down there Friday and spending Saturday at a family wedding, I didn't feel like it to be honest. I also wanted to see Ozil play for Germany without the distraction of writing a blog. As it turned out, such was the boredom dished out by the Germans in the second-half I might as well have written something after all. Ozil, of course, set up the injury-time clincher for Germany but was as frustrating to watch as ever as far as I'm concerned. I digress.
I watched the France game in my hotel room on Friday night and I was really pleased for Giroud that he got the opening goal. He had missed a couple of good chances before half-time but the goal he got was a really good centre-forward header. The goal by Payet got the tournament off to the right start really as a host nation doing well always makes it more enjoyable all round. Unfortunately by that time on Friday evening the darker side was already emerging in Marseille. I will come on to that towards the bottom of this post as what I want to say needs to be seperate from the football itself.
My Dad, brothers and nephew were able to take advantage of my wedding issues (it was the wife's family) by having my tickets for Switzerland v Albania in Lens on Saturday afternoon. I'm told it was a decent game with lots of missed chances and that Granit Xhaka made a good first impression on my family. Surrounded by Albanian fans my nephew was resplendent in Arsenal shirt with "Xhaka 29" printed on the back and wrapped in a Swiss flag for the day. Hopefully I'll get to see the next Swiss game on the TV and get a decent look at Xhaka myself for the first time.
I watched (very) brief highlights of Wales v Slovakia when I got back to the hotel on Saturday night. I wasn't surprised to see Aaron Ramsey badly at fault for the Slovak equaliser, or missing an open goal with a free header. However, having read that he got the assist for the Welsh winner I was very shocked to see that it wasn't quite how I'd imagined. Instead of a slide-rule pass it was actually yet another show-boating cock-up by Ramsey that saw the ball run loose for Robson-Kanu to mis-kick it past the goalkeeper. Ramsey really does wind me up and that ridiculous hair makes him look an even bigger chump.
As far as England go I was reduced to following it via an intermittent 3G signal giving me access to Twitter. When I saw the starting line-up I couldn't quite believe it. Leaving out Vardy and Wilshere, but selecting Lallana and Sterling, made no sense to me whatsoever. Vardy has played in the warm-up matches and has done well in his England appearances. Sterling has been worse than Walcott all season. As for leaving out Jack I just don't get it. Having got in front, and I'm told created a number of opportunities thanks to Wayne Rooney, it was obviously disappointing to concede a soft equaliser in injury-time. However, you reap what you sew and when you have a back-four including Smalling and the Tottenham full-backs (who are never, ever in position when opponents break forward) you are asking for trouble. Fail to beat Wales and England could be staring down the barrel of yet another early exit - changes are needed against Wales with Bertrand, Wilshere and Vardy just three of the players who really need to come in to the side.
I was home to see all the games yesterday. Croatia were deserved winners in their match, while Northern Ireland simply didn't get the tactics right against Poland. For an hour they tried to do nothing but defend, failing to realise that Lewandowski is really the only genuinely top player Poland have. They didn't put anything like enough pressure on Szczesny at the other end. When Washington was brought on to play alongside Lafferty then Northern Ireland were the better side and should have scored through either Washington or Steven Davies (or both) to force at least a draw.
I was at work today so I haven't yet seen anything of the Czech Republic v Spain match. I understand Petr Cech had a great game in goal for his lot, while Tomas Rosicky was all action in helping his defence for most of the game. I also hear that the Czech's might easily have got a result despite being largely outplayed for most of the ninety minutes. That's a shame really as any side with Fabregas in it, but who leave out Santi Cazorla, I would like to see fail. Republic of Ireland missed chances in the first-half that would have given them a great start to the tournament and I'm not sure a point this afternoon will be enough for them to progress ahead of games with Belgium and Italy.

Now, about the trouble in Marseille. I have seen, read and listened to a lot over the last few days. At no point have I heard anything that tells me the trouble was "caused" by England fans other than their mere presence seeing them targeted by local French thugs, Russian fans, and then followed up by a brutal French police. I have become sick of people who have never been to a football match abroad (and in many cases never in England either) telling us what's what with regards the fighting. It is most instructive, I believe, that even the media seem to have realised now that their lambasting of the "English thugs" has been totally misplaced. The football writers in the press corps, to their immense credit, at no point chose to throw criticism the way of the England supporters. Being used to travelling with England they have no doubt seen exactly what has happened down in Marseille. The reaction of public figures, like MP Andy Burnham, was a genuine disgrace - he jumped in with both feet, as did the FA, to condemn the "embarrassing" behaviour before even considering whether or not he had the facts to hand.
I have seen others claiming that the English should have just moved away when bottles and chairs were thrown at them. This is utter tosh. Firstly, where do you move away to? It's easier said than done. Secondly, it is not the English way to run from that provocation. Rightly or wrongly the English fans will stand and fight in those situations and this is always the thing that makes the press, as it did initially this weekend.
What happened on the day of the match, both in the city and in the stadium, was the most scary aspect of the whole thing. The French authorities have now revealed that 150 Russian men were behind the trouble. We are told that they were "highly trained and very organised" in the way they attacked English people - and the attacks were totally indiscriminate. If you were in the wrong place at the wrong time you could have been one of the unfortunate souls to be seriously badly beaten by these animals. The words "trained" and "organised" are the ones that have struck me in this though. And it is also very interesting that not one of these 150 men have been arrested despite the presence close-by of a large amount of police - the same police who have been caught on video hammering stricken England fans while they lay on the ground injured. So 150 "highly trained and very organised" Russian men have run amok in a French city and not one has been nicked. It would come as absolutely no surprise to me if it is revealed in the future that these men are state sponsored by Russia to show some kind of intimidation to the little Englanders. They attacked like an army might. Bit of a coincidence.
The scenes at the end of the game had chilling reminders of Heysel about them. The sight of people sprinting across the terrace and climbing to safety while pursued by the Russian animals was scary to watch. Had that fence not been quite so easy to scale then who knows what injuries would have been suffered by the frightened, and innocent, people (including women and young children) as they attempted to escape.
Taking an England game to Marseille after what happened at France 98 was always a stupid thing to do by UEFA. To take England v Russia there was even worse. The lack of security at all the other grounds is even more alarming. Given the security state in France right now how is anyone able to get a flare or a fire-cracker or, worse still, a flare-gun(!) in to the stadium? A number of games have now seen the flares etc set off - these are essentially small bombs and/or firearms that are getting in to the games. At Lens on Saturday my Dad tells me the security check was a cursory patting-down of pockets at the very entrance to the ground - there was no metal detecting wand or airport style screening that we might have expected. In short the security at Euro 2016 is a joke. Is it any wonder though when you see how the French police handled things in Marseille?