All green in Lille, all blue for England, Ramsey painting France red 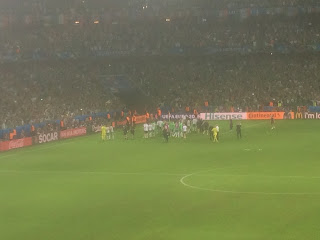 As someone who is, at best, cynical about the relevance of international football I am a proper hypocrite once a summer tournament comes around. I firmly believe that international matches should be confined to that part of the season in any case, thereby neither impacting nor lengthening the domestic leagues. Even so, I have been right in to Euro 2016 and I've enjoyed most of it. There may have been some defensive stuff from the smaller nations but when teams do that to Arsenal all I hear from the media is "deal with it" as "they're not just there to roll over for the bigger clubs". For that reason I have sat there in head-shaking disbelief at some of the pundits complaining there has been a lack of attacking intent. This was no more evident than following England's woeful attempt to break down Slovakia the other night. I'll come back to that further down as I first want to deal with the best day the tournament has had, and that was yesterday.

In the ballot for tickets I applied for the game at Lille last night long before I knew who would be playing in it. I was lucky enough to get those tickets. The city of Lille is no more than an hour or so from Calais and, as I live on the Kent coast, it wasn't too much difference in terms of distance to going to Arsenal. That Ireland were drawn to play in the game was even better - I am from Irish stock on my Mum's side and this gives me three teams to "follow" in the tournament - greedy and non-sensical of course, but who cares? That being the case I dressed the car as if for a Wembley day out in Irish colours and took my eldest out of school for a cultural learning visit to France. What a day it turned out to be.
It was baking hot in Lille yesterday, all day long. After a walk around the stadium area - if you ever get the chance to go to the Stade Pierre Mauroy then don't miss the opportunity - we found a bar to sit in and keep as cool as was possible in the intense humidity. The weather forecast was for heavy rain and thunder storms by late afternoon but this never materialised and it remained hot and sunny throughout. We didn't venture in to the city itself and I was told by some Irish fans later on that it was a bit too manic there as the beers flowed - no trouble, just a bit too busy. In the bar we were in were fans of both Ireland and Italy, a fair few from Belgium (the border of which is only a few miles away) and two blokes in England shirts. It was friendly throughout, which is exactly as I had expected it would be.
When we eventually went in to the stadium area - the concourse has been fenced off to create an exclusion zone for security purposes - we were searched twice and I have absolutely no problem with that. Unlike the cursory glance in bags we get at Arsenal this was a proper, thorough turn out of the things you had with you. As a result I was amazed to see a smoke-bomb go off in the official Irish section when they scored. Having booked mid-range tickets behind the goal I expected us to be lower tier so was more than surprised to find we were in the Lille version of Club Level at Arsenal. The air-conditioning and comfortable seats in the areas behind the stand was most welcome as we watched Hungary and Portugal play out an amazing 3-3 draw on the TV screens. Our seats themselves, five rows back in the middle tier and to the right of the penalty area, were brilliant for the price paid. The roof had been closed due to the threat of rain and the already awful state of the pitch and it was very reminiscent of the 2003 FA Cup Final when we beat Southampton. It is a really impressive, atmospheric ground to watch football in.
It was obvious from early in the day that there would be more Irish than Italians in attendance. What I hadn't envisaged was that, in a crowd that must have been close on 50,000, about 45,000 would be Irish fans. The stadium was a sea of green - there were even large numbers of Irish in the official Italian section which was directly below us. Everywhere you looked were Ireland supporters and they/we made one hell of a noise. The roof being shut no doubt added to the decibel level inside the stadium - it certainly added to the heat. The atmosphere during the game, and the support of the Irish fans, was among the very best I have ever experienced. We didn't stop singing or encouraging, even when all seemed lost.
I felt Ireland dominated the game up until about the 75 minutes mark. At that point a few of the players seemed to have run their race having put in such a remarkable effort. There should have been at least one penalty for Ireland - the foul on James McLean was right in front of us and was as stick-on a penalty as you will ever see in any game of football. It was a stunning performance as they pushed the Italians back in defence time and again. Insigne had come off the bench and looked like winning it for Italy before two amazing moments in their penalty area.
When the referee waved play-on for a Bonucci dive, and Wes Hoolahan was suddenly through on goal, everyone was up and waiting for the ball to hit the net. It was unbelievable that he should fluff his lines that badly. With only five minutes to play that was the chance gone. Only Ireland weren't done just yet. Hoolahan himself, just seconds later, put a wonderful ball in to the box where a flying Robbie Brady beat the Italian goalkeeper to the ball and nodded it in to the vacated goal. It was absolute pandemonium in that stadium. A deafening roar and a sea of bodies flying in all directions. My little boy asked me afterwards if that was what it was like when Welbeck scored against Leicester and, if I was comparing it to something similar, then it most definitely was (Ramsey's FA Cup Final winner v Hull was also just like it for the level of the madness of the celebrations). Perhaps it's only right that the Irish hero should be called Brady. As I said at the top of this post I am cynical about international football but Ireland gave me one of my greatest ever moments at a football match last night. The scenes driving away from the stadium were also some of the best you'll ever see. What a night. 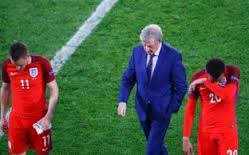 Of course Jack Wilshere got most of the blame for England being utter rubbish on Monday night - after all, he plays for Arsenal. True it wasn't Jack's greatest game ever but, with the exception of the outstanding Nathaniel Clyne (and maybe Dier) he was in good company. Vardy missed an open goal and then I didn't see him again all night - towards the end when England were camped in the Slovakia half I couldn't work out if he was still on the pitch. Daniel Sturridge was having to come far too deep just to get on the ball and England were totally clueless about how to break down a defence marshaled by Martin Skrtel. Not for the first time an England team stank the place out. To hear the pundits afterwards pining for the chance for England to play against a more attacking opponent was laughable really - a team that actually attacks England might just take advantage of that woeful defence and dodgy goalkeeper they keep fielding.
The only people I feel sorry for where England are concerned are the large band of loyal match-going fans. Like the Irish last night they never stopped singing and supporting England on Monday. They were creating the sort of atmosphere that any team should be inspired by. The England players, unfortunately, are slow and ponderous. They don't know how to play football in tight areas - Jack never gets the ball passed to him when he isn't in at least ten yards of space, even though he would receive it in far more congested places in an Arsenal shirt. Basically they just aren't very good and it was turgid, uninspiring football just as it was in the first two games to be honest - especially against Wales. They should beat Iceland, of course, but can you really see them beating France if they get through? 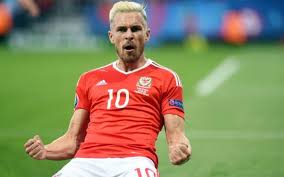 
Regular readers will know I am not a huge fan of Aaron Ramsey. I criticised his display in Wales' first game where he was badly at fault for the Slovakia goal. However, against England last week he was truly sensational and he continued that on Monday as Wales thrashed Russia in the final group game. He took his goal brilliantly and played a stunningly good through-ball to the Real Madrid chimpanzee for the third goal. It has certainly been the best play Ramsey has produced since his golden spell a couple of years ago. You have to hand it to him too - on the big stage (albeit "international level" is mostly far below Premier League standard) he is delivering the goods. Wales won the group, which served England right for presenting themselves with the group win after beating them last week, and Rambo has been to the fore in doing that. At the very worst it will add £10m+ to any potential transfer fee. He also knows how to endear himself to Arsenal fans too following his comments comparing England to Spurs yesterday.
Wales now play my "other" team in the shape of Northern Ireland. They miraculously qualified for the last 16 despite a 1-0 defeat to a Mesut Ozil inspired Germany. Michael McGovern in goal prevented a humiliating thrashing against the Germans. Now they will fancy their chances against the Welsh, and rightly so. Michael O'Neill is an expert at setting up a team to play a particular opponent. If he can nullify Bale and Ramsey, effectively making it 9 v 9, then Northern Ireland have a real chance to make the quarter-final - outside of those two the teams are very similar in terms of comparable quality.
I'll just finish by mentioning that Petr Cech couldn't perform enough miracles to save Czech Republic as they disappointed for all but a 15 minute spell at the end of their game with Croatia. It was both great, and sad, to see Tomas Rosicky bow out of the tournament (and hopefully he will retire from football now) with one more fabulous pass to set up a goal before yet another injury saw Little Mozart leave his last symphony unfinished. On that poetic note...