This is how it should be 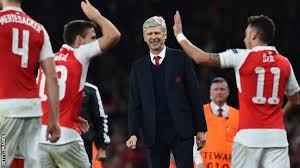 The last few weeks have been good for us Arsenal supporters. Five goals away at Leicester preceded an international break book-ended by different styles of 3-0 wins, and that was followed up quickly by a 2-0 home victory over the most in form side in Europe. It's fair to say that Arsenal are playing pretty well at the moment and it is impressive that they have been able to win these games in different ways.
I haven't written since before Watford so I'll deal with that first. I felt the attitude of the players was all wrong in the first-half. Following the way we had beaten Manchester United I had hoped for the same effort early on at Vicarage Road. Given the difference in the quality of the opponent, had we played the same way last Saturday we might have got another glut of early goals. As it was we started fairly brightly before Watford's enthusiasm got them on top for a good spell. They created a chance or two that were spurned and Ramsey missed an even bigger sitter for us than the one against the Mancs. Mr Tyler on Sky Sports was willing Troy Deeney to get a goal against us and he seemed to be the key player for the Hornets. He reminded me a lot of people like Kevin Davies and Peter Crouch in the way that, whenever the ball is played towards him in the air, his first move is a foul on the defender that always seems to go unnoticed by the officials, before invariably hitting the deck himself to try and win a free-kick. It is an effective style, but both Crouch and Davies were better footballers than Deeney and that's probably why he is not hitting the net in the Premier League.
The second-half saw more of Watford putting pressure on without genuinely threatening, up to roughly the hour mark. It was at this point that Mesut Ozil seemingly decided he ought to put in some effort and, with Alexis as energetic as ever, the pair combined to put Watford away in good style. The lay-off by Ozil for Giroud's goal was sensational and that's what you pay the big bucks for. I give Ozil plenty of stick, and I truly believe he deserves it most of the time, but when he turns it on he is sensational. The third goal, while a deflected Ramsey shot, belonged to Hector Bellerin for a brilliant run in to the box and short pass that laid it on a plate for the Boyo. More on Hector below.
So a 3-0 win at Watford was more than adequate. The way Arsenal went in to overdrive as Watford's hard work began to tire them out was familiar for the way Wenger's teams used to play when faced with a determined opponent. There was no lack of patience in the players and, once they got in front, they went forward with the idea of putting the game away. It was impressive and it afforded Arsene Wenger the chance to give Ozil and Alexis a short rest towards the end of the game. All in all it was a very satisfactory performance.