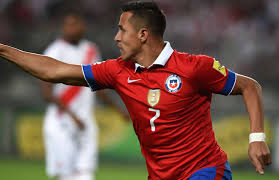 Regular readers will know I am not a fan of the international break. I believe football would be a far better sport without international football being played at any time during the season, with all those fixtures played once domestic hostilities were over for the year - by shortening the season so that it started later and finished earlier all the international games could be done before the end of May in any year outside of a major championship. That being the case it may come as a surprise that I'm writing with some positivity about this latest pause to allow our players to turn out for someone who doesn't pay their wages.
For Arsenal's players this has been a good couple of weeks in terms of seeing them keeping up their form. Most notable of these is Alexis who scored three goals in two games for Chile. He bagged the second goal to see off Brazil and got two against Peru last night, as well as creating their other two goals. It remains to be seen whether or not the groin injury he picked up against Manchester United has been aggravated further but he didn't look too unfit on the highlights I've seen. With nine goals in his last five games he is truly back to his best. Only Lewandowski can boast a better goal scoring record at the moment, but Alexis' all round contribution must surely see him rated as one of the very best players in the World on current form. If he is fit and raring to go on Saturday evening then Watford can afford to be very concerned.
Germany were struggling over the weekend and their defeat to Ireland was notable for a lack of contribution from all of their star players. Step forward Mesut Ozil as the architect of their crucial win on Sunday to secure qualification. I remain totally frustrated by Ozil and the way he too easily becomes anonymous. However, the way he stepped up for Germany when it really mattered was good to see. I'd love to see Ozil show us the player I know he can be - it would win us the Premier League if he was to produce on a consistent basis for Arsenal.
Olivier Giroud has been seriously lacking in confidence as has been clear for all to see. He played from the start for France last night and had scored two goals before six minutes had been completed. This should hopefully see some of that confidence restored for Giroud, but he was assisted greatly by some awful goalkeeping by Schmeichel for both of his strikes. On the plus side you have to be in there to get the chances in the first place, but there can be no argument that his finishing remains sub-standard far too often. He won't have taken too much solace from seeing Theo Walcott's outstanding goal for England on Friday night - a superb run and beautiful finish to put his side ahead. I wasn't upset to see Theo sit on the bench throughout the game in Lithuania on Monday night. Alex Oxlade-Chamberlain did play, and score, but was generally poor for most of the match, while Kieran Gibbs got a good ninety minutes in and played extremely well. The Ox might take confidence from his goal but his general play is nothing other than poor right now. Calum Chambers was able to stay sharp with a full run-out for England U-21's.
Spain also played a couple of games and Santi Cazorla got himself a couple of goals. The little man hasn't really been looking sharp when presented with opportunities to score this season so seeing him grab two is a real boost. I know he is playing in a deeper role for Arsenal these days but his ability should see him scoring far more than he has in the last year or so - taking penalties is fine but I want more from him in open play. Hector Bellerin played in one of Spain U21's matches which means he wasn't over-burdened too much. Meanwhile the forgotten man Joel Campbell scored a lovely winning goal for Costa Rica against USA - in the absence of too much game time at Arsenal he really benefits from the international arena. Hopefully he'll be able to repeat the goal scoring trick for Arsenal in the not too distant future - Sheffield Wednesday away is likely to be his next genuine opportunity to impress Arsene Wenger.
So all in all it looks like a positive time away for the Arsenal players involved in international squads. Obviously I'd still rather these interruptions didn't exist, but all the time our players do well and don't get injured we can't be too upset - this being a rare occurrence of course. If you add to this the sights of Cesc Fabregas missing a penalty and Robin Van Persie sealing Holland's fate with an own-goal then it was all a bit Carlsberg really.
Posted by DvbrisG at Wednesday, October 14, 2015