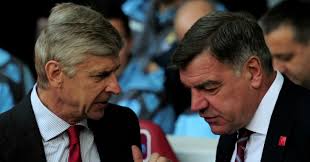 "You're more deluded than Rodgers"

As you know, I am not one to sing the praises of Arsene Wenger on a regular basis. However, I am always offended on his behalf when jokers like Sam Allardyce regain the ear of their mates in the press, with the express intention of making headlines for themselves at Wenger's expense. It says a lot about Allardyce that he chose to talk about Arsene on the day he took over at the worst team in the Premier League. I suppose it was his intention to do anything other than mention the fact that Sunderland are in all sorts of trouble and he isn't that likely to be able to get them out of it. It also enabled him to deflect attention away from his sacking at West Ham, brought about by the fact that he had no idea how to get them playing the sort of football the regulars like to watch at Upton Park, almost regardless of any results.
Allardyce, lest we forget, was the pioneer of the "kick Arsenal off the pitch" style of play. It was his Bolton Wanderers side that booted our players out of the Title race in 2003 with an unpunished assault on top footballers of the type Leeds United indulged in during the early 70's. The difference between Allardyce's Bolton and Revie's Leeds was that the Yorkshire side also had brilliant footballers of their own. The big walrus-faced cretin that is Allardyce became famous off the back of "knowing how to beat Arsenal". In reality this meant he was in charge of a media-sponsored, FA backed, campaign to physically injure Arsenal players during a football match. The end results of this "style" were smashed legs for Abou Diaby, Eduardo and Aaron Ramsey. After all, those namby-pamby foreigners didn't like it up 'em Mr Mainwaring.
I despise Allardyce. He is the type of boorish throwback that English football should have left behind years ago. He is, thankfully, the last of the dinosaurs who think physical, thuggish football is the way to go in England (at the top level, at least). Is it any wonder English players lack the technical ability of their European and South-American rivals? My ten year-old plays for a local team and is lucky enough (now) to have a coach who teaches football to them properly rather than what I see from many of their opponents (and the bloke who ran his former team) where it is all about hitting the ball long and shouting loudly about "getting in to them" for example. Allardyce also thinks he is "friends" with Alex Ferguson. I've no doubt Ferguson kept on the right side of Allardyce as his players tended not to go for United in the way they did Fergie's rivals at Arsenal - nothing to do with enjoying a bottle of wine with the old Scottish alcoholic after another drubbing of course.
Arsene Wenger is an erudite, educated, articulate man and an advocate of the best kind of football. Can Allardyce really be surprised that Wenger didn't want to invite him in for a drink? Is he really surprised that Wenger disliked losing to his band of thugs? Why would Arsene Wenger have any interest in discussing football with a man who hasn't the first idea about playing a passing game and exciting football? Signing Jay Jay Okocha and Yourri Djorkaeff didn't mean Bolton played good football, it just meant they'd brought in a couple of really good players and not used them properly in the twilight of their careers.
The problem with Allardyce being back is that the media fall over themselves for his quotes, especially where Wenger (and Mourinho) are concerned. There is no doubt Allardyce has some kind of formula for getting results against Arsenal and Chelsea, and for winding up the aforementioned managers. However, both Wenger and Mourinho can simply point at their career trophy cabinets and laugh in Allardyce's face. Here is a man who claimed he could manage Real Madrid and still thinks he might replace Roy Hodgson with England. He makes Brendan Rodgers look level-headed. Sadly the press love him. I've never had any particular ill-will towards Sunderland until now, but I really hope they get relegated so that Fat Sam can sod-off back to Real Madrid as soon as possible.
Posted by DvbrisG at Thursday, October 15, 2015