Our lack of goals is scary after Newcastle win 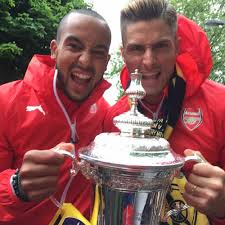 They might be alright if they played at the same time
The game at Newcastle on Saturday was a difficult watch. In fairness Arsenal started brightly and I was not upset with the selections of Oxlade-Chamberlain and Walcott - if nothing else it added much needed speed across the ground to Arsenal's team. In the absence of Ozil (is he really injured?) I would have preferred a change to formation with Giroud and Walcott allowed to play as a front pairing. Of course Arsene Wenger doesn't do tactical changes so we had the pedestrian show-pony that is Aaron Ramey slowing everything down whenever the ball went forward. Despite that we made a bright start and were causing Newcastle a few problems in the opening 15 minutes. We should have been given the clearest of clear penalties but, for some reason, the officials were the only people watching the game who missed the foul on Bellerin.
When the red card came for Mitrovic it probably didn't do Arsenal's attacking options much good. Using the pace of Walcott in behind became something that was never going to happen as Newcastle understandably got everyone deep and behind the ball. The sending off itself was a clear red card, unless you're a bitter Geordie who can't see that their player went over the top of the ball and raked Coquelin's shin. Steve McLaren claiming that he had simply stood on the foot of Coquelin marked him out as a man looking desperate for excuses already. What followed was a continuous assault on Arsenal's players with some pretty nasty fouls being made. At least the referee was getting most of his bookings right and it even provided some atmosphere from the home fans (is there a bigger myth than the "great" fans at Newcastle United?) as they decided that booing loudly should be the order of the day.
With Newcastle sitting back we saw an Arsenal team totally devoid of ideas and intent to score a goal. The Ox had a terrible game, as did Cazorla, Ramsey, Alexis and Theo Walcott - probably the miss of the season by Theo from about two yards out. There were hardly any shots, no incisive passing, not one player trying to take people on and create something. It was surely crying out for a change to the way we were set up. Instead, after 69 minutes, we saw Giroud come on in place of Walcott and we carried on in the same vein. Why not do something different? Why not put two men up front and cause Newcastle a few problems - they were never coming forward to attack us so we should have been pushing on. Having got a lucky deflection to go 1-0 up it was painful to watch us just passing the ball around with no idea of how to actually get through the defence. Wenger then decided to bring on Arteta and protect the 1-0 lead against a side who hadn't had possession in our penalty area since the start of the game. And, just for good measure, Giroud finished the game by proving everyone right about the need for a new striker by missing the only proper chance created in the second-half.
Arsenal have scored three goals in the first four games of the season. Only one of them has actually been scored by an Arsenal player. Wenger has failed to address this and now has about 24 hours to do so. It is as clear as day that we lack the sort of centre-forward that could play in this formation and drag us to the Premier League trophy next May. We are also an injury or suspension away from losing Francis Coquelin and the only protection our back-four receives. All the optimism that swept through Arsenal fans following the outstanding FA Cup win has been eroded away to nothing. Wenger spoke the other day of "working day and night" to secure transfers, yet he spent his Sunday evening moonlighting on French TV coverage of PSG v Monaco. The man is continuing to take us all for fools, but we've never worked even one day in football so he can treat us with utter contempt.