Cech is now an Arsenal player, Chambers isn't, Welbeck might not be 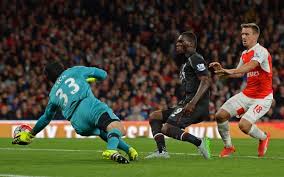 We can now say we have a goalkeeper