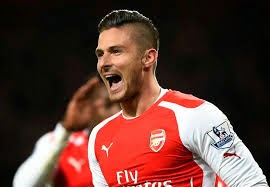 Keeps banging them in

Two weeks ago Olivier Giroud endured a nightmare evening at home to Monaco. By the time he was hooked by Arsene Wenger he was on the verge of an Eboue-style meltdown in front of a frustrated home crowd. Every time the ball went near him it didn't end up where it was supposed to, and the more he tried the worse it seemed to get. It was an odd kind of thing to happen when Giroud has been in such good goal scoring form. Since coming back to from injury, and being eased back in to the starting XI, he has had probably his strongest run of goals since arriving at Arsenal. Regardless of that form, however, lesser men might have been seriously affected by the humiliation he suffered against Monaco - a game of more than a little interest to a live TV audience in his native France. Whatever else Giroud might be lacking, he certainly isn't short of character.
Giroud was immense in the game on Saturday. He renewed his combination with Aaron Ramsey who also returned to the form we saw so much of last season. The quality of all three Arsenal goals against West Ham was top class, but Giroud was instrumental in the first two. The first saw him linking the play and then taking the ball from Ramsey in the penalty area and burying a great shot in off the post. I think it must be up there with the best goals he has scored for Arsenal. Of course he still needs to do it in the bigger games, and with Monaco coming up tomorrow night he'll get an immediate chance to atone for the other week. But you can't complain about his record this season. To have 14 goals despite missing more than three months with a broken leg shows a great return. He is getting better, and has improved beyond recognition from the man who arrived at Arsenal. His role in the second goal underlined that improvement, with the initial dummy to Ramsey and then a great one-two (he probably should have shot at goal himself) giving the Boyo the chance to get on the scoresheet and wrap up the points.
It is perhaps worth noting that the oft-maligned Giroud has been playing a form of catch-up ever since he arrived at Arsenal. He's always been a decent striker, but not a top one. He was charged with replacing Robin Van Persie who had been totally prolific in the preceding two years, while new to the Premier League and Champions League. Again it's maybe a mark of the man that he could take that challenge in the first place. If he carries on with his current run of form then he will be pushing hard at the door to be accepted as a much better player than we thought. He holds the ball up better than any centre-forward we've had since Alan Smith retired, and it is clear that Ramsey looks a better player when Giroud is in the team with him. Arsenal could make better use of his aerial prowess if someone would just teach the wide players how to cross a ball.
In short, Giroud is becoming a vital component in a seemingly improved Arsenal team. Credit is very much due.
Posted by DvbrisG at Monday, March 16, 2015