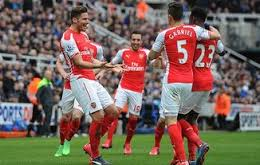 This team seems to have some spirit


I was really pleased with the win at Newcastle. Not only did it mean Arsenal won every game they played in March, but it showed that this group of players has some mettle and will to win even when they are up against it. Given that Arsene Wenger made fewer changes than might have been expected following the exertions of midweek in Monaco it was a result of the highest quality at St James' Park.
I've seen only the highlights from the game as I was working until gone midnight on Saturday, such is life, but in the first-half Arsenal were superb. We could (probably should) have been far further ahead than 2-0 (I hesitate to say out of sight on the grounds that we blew a 4-0 lead up there not that long ago). Chances came and went, with Ramsey getting in the way of an almost certain Giroud hat-trick among the best. Giroud showed he is a man in great form with a ball coming off his knee for the first (when things are going your way...) and a great piece of centre-forward play for the second. Alexis buzzed around really well until his battery went flat, while Cazorla and Welbeck seemed to give them a torrid time (more on Danny below). If it hadn't been for Ramsey and his famous back-heel pass to opposition defenders then who knows what the score might have been?
After half-time we started slowly and conceded almost straight away. After that it was almost entirely backs to the wall. That had little to do with Newcastle's quality, and plenty to do with Arsenal's players hitting the wall physically. Arsene got his subs spot on with the energy and running ability of Rosicky and Flamini, while Ospina probably put in his best display for Arsenal so far. It struck me that the likes of Monreal and Cazorla and Alexis had run their race in this game. Meanwhile there was one instance of Ramsey (who has no right to be tired) watching Coquelin have to force his way past him to close down the play on the edge of the box - that was a great little window on the difference in the mentality and desire of certain players. As backs to the wall stuff goes it was fairly impressive from a truly exhausted group of players. Once again Gabriel didn't shirk the physical challenge and there are promising signs from him alongside Koscielny. Yes, we were holding on in the closing stages, but it's no wonder given the schedule we've had that the players looked a bit over done. I couldn't accept the complaining I was reading online about the second-half display given the effort that had been put in to the game on Tuesday.
Amid the defensive hard work on Saturday in the second-half there was one moment of sheer class from Danny Welbeck. He picked up the ball around the half-way line and took off like Thierry Henry. The way he showed the ball to the defender and then raced past him, and away from him, with the ball was so reminiscent of the way Henry would regularly destroy Jamie Carragher (I can think of at least three examples as I sit writhing this). The only thing missing was the finish as he took his customary heavy touch in front of goal, suddenly looking more Sanogo than Henry. It just proved to me, again, that Welbeck is a far better player than I ever thought when he was at Manchester United. If he could just add finishing to his game he would be a truly stunning footballer - his volley in the first-half was sadly typical of Danny in front of the goal. Having said that, he is clearly an improvement on Theo Walcott as a footballer and is one of the many reasons that Theo looks to be seriously out of favour.
With the other results around us it was another important victory in the chase for the highest finish possible. With Chelsea drawing late on yesterday I was starting to get the merest glimmer of excitement that a collapse was possible and we might sneak in at the top, but I think their winner was the end of that once and for all. Second place is certainly not beyond this Arsenal side if they can keep up their form and results. Manchester United look like they might have finally woken up, though Stevie Me gave them a huge helping hand yesterday. Liverpool have had a good run, and Spurs have not yet gone away, so keeping on winning is huge now. We also need a few players to be "injured" before the international games begin.
Posted by DvbrisG at Monday, March 23, 2015