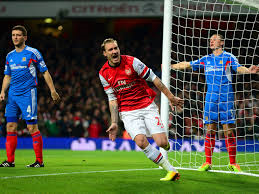 As I wrote yesterday Arsene Wenger was always planning to "rotate" one or two of his players for the game against Hull. I didn't think there would be as many as five changes and I certainly didn't expect to see Nicklas Bendtner in the starting line-up. The Dane wasn't even in the 18 at Cardiff on Saturday so it was definitely a shock to see him come in for Olivier Giroud. With Walcott back and Podolski on his way I thought that maybe Bendtner had finally made his last Arsenal appearance. As it was he managed to do his job well.
I don't agree with this resting of key men from the starting XI as it doesn't often pay off. Last night Arsene got it right, however, with Bendtner taking less than two minutes to repay the Manager's faith. I said in the preview piece that Carl Jenkinson is capable of putting in some good crosses and he certainly proved me right with that delivery for Bendtner's early goal. It was a really good move down Arsenal's right, and the movement off the ball created the space for a first time cross from The Corporal. Bendtner had made a perfectly timed run and could hardly miss having got on the end of it. It was a really superb goal. I've now seen Bendtner get three goals this season (he scored twice for Denmark against Italy) and each of them has been from a good cross that he's been able to attack. If there has ever been a defence for Bendtner's play in an Arsenal team then it has to be that we haven't played to his strengths often enough. If you could just get him to stay in the middle and then put a decent cross in he will invariably get on the end of it.
It was a fairly dominant display from there on. The second goal, right after half-time, was a killer for Hull. Again it was a magnificent Arsenal goal. Aaron Ramsey clearly saw Mesut Ozil's pass to Flamini on Saturday and felt that he fancied a piece of that action. It was a wonderful ball he played behind the defence for Ozil to easily pass the ball in to the bottom corner. It was simple yet utterly brilliant. My brother tells me that the people sitting next to him arrived late for both halves of the game and missed both Arsenal's goals. Serves them right.
You could argue that Arsenal should have won by more goals such was the dominant way they held the game last night. On a lot of occasions I would be inclined to agree. However, when you consider we play Everton, Napoli and Man City (two of those away from home) in six days next week then the conservation of some energy is welcome. The scheduling by Sky/BT Sport of those two Premier League games is a scandal for which the FA should be ashamed to have allowed to happen. As it is, we've ticked off another win and earned another three points. City and Chelsea keep winning, but so do Arsenal at the moment. Another loss for Man Utd has put them out of the race it would seem. Liverpool are still hanging around, reliant on Luis Suarez. Spurs' comeback win at Fulham could see them start to pick things up now. As long as Arsenal keep grinding out the results it doesn't much matter what anyone else does. Get to Christmas without being reeled in by City or Chelsea and it is very much there for us to go and win. These next three Premier League games are huge. By December 25th we'll know if we are genuine contenders.
Posted by DvbrisG at Thursday, December 05, 2013