Arsenal pay the price while the supporters just count the costs 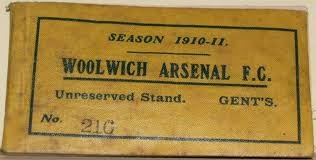 A bit cheaper in those days

Arsenal's chickens came home to roost once again yesterday in the Champions League draw. The terrible second-half performance at Napoli meant finishing only second in the group which meant an inevitable draw against top quality in the last 16. We ended up not only drawing quality, but drawing the best in the competition. Of course, if you want to win the thing then you have to beat top teams at some point, but the later you play them the better. Over two games in February/March we have little chance to beat Bayern Munich. This is not just because of the quality they possess, but the nature of Arsenal's fixture list is unbelievably hard. It could be a very miserable time for us Gooners if things start to go against us on the pitch.
I know we went out only on away goals to Bayern last season but there is no doubt they are streets ahead of us. On our day we can get a result and beat anyone. Have a slightly off day against a side like them, however, and they might destroy you. Can you imagine the fun Ribery and Robben might have if they came up against a defence missing Sagna or Gibbs? Personally I would far rather have been coming up against the likes of Olympiacos or Zenit St Petersburg than the reigning European Champions. We have to hope for the sort of results we gained against the likes of Real Madrid in 2006, but we don't quite have Thierry Henry up front these days.
I haven't had a chance to write about the price increase announced by Arsenal last week as I was busy lamenting the defeat at Manchester City. Now it's quiet for a day or two I have the opportunity to have my say.
The first thing to say is that it is an outrageous liberty to put prices up by 3% when a new TV deal is bringing in something in the region of an extra £30m. It simply can not be justified. To claim that it's in line with inflation is also an outrage. Depending on which way you look at measuring it then inflation can be seen around that figure, but that is to ignore the fact that the average punter is not receiving year-on-year salary increases of more than 1%. Yet again the cost of watching Arsenal has become more prohibitive to the man in the street.
I have never known Arsenal to announce prices at this time of the year. I have to say I think the announcement being made on Friday was nothing but a horribly cynical move from Gazidis and co. They obviously decided some time ago that they were going to raise prices. Having done so they had to think carefully about when to announce it. That being the case they knew they couldn't do it until progress was secured in the European Cup. They also looked at the upcoming fixtures and knew that it might not get much better than a five point lead at the top of the Premier League. They used the qualification in Europe and the position in the league to limit the criticism they would receive from fans for putting up the cost of going to Arsenal.
What exactly are we paying for? We were told that Mesut Ozil was paid for through existing resources, so it's not that they require the extra cash to pay for a star signing. The debt on the stadium is also being managed through a carefully selected financial package, so it's not that they're trying to get it paid off quicker. The other thing we're not yet paying for is the chance to watch a successful side on the pitch. This is not (yet) a winning team. There are no trophies to celebrate. I am at a loss as to why my season ticket is going up by 3% other than to line the pockets of the Kroenke family in the longer term.
The cost was already prohibitive for many (my seat for Grade A fixtures is £80, albeit offset by a cost of less than £30 for Grade C games) and will be so for even more Gooners once we get to next season. I have two children and the cost of bringing them to Arsenal is about to spiral out of control. Perhaps it's just as well that I work shifts that prevent me from going to every game, otherwise my boys might never get to go to Arsenal.