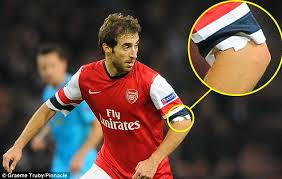 I told you Jack was getting back to form after Saturday. His first goal last night was the sort of thing he did regularly in the Reserves and Youths at Arsenal. A few years ago, when Setanta was available on Sky in the UK, Arsenal had their own TV channel. One of the few highlights on the station was the extended highlights of the Youth sides and the live Reserves games. One player stood out above any other and that was Jack Wilshere.
I couldn't believe Arsene Wenger's claim the other week that Wilshere is not a goalscorer. Surely the Manager had watched Wilshere as a youngster? The class of that first goal was no fluke. It was the mark of the player that Jack has the potential to be. He has had a tough two years or so with injury. If this is the start of the rest of his career then we are in for a treat. Despite playing out of position on the right he showed that he is hungry to play in the Arsenal team. The contrast with another disappointing display from our star man, Ozil, was marked.
In truth Arsenal were very comfortable last night. I felt we were lacklustre at times with far too much willingness to play the ball back to the centre-halves, or back towards the defensive part of the midfield. That said, we created more chances than in recent games though Marseille's decision to play an almost complete second-string didn't harm our prospects. We could (probably should) have won by at least five goals. The chances that went begging from Ramsey, Ozil (three times if you count his diabolical penalty), Cazorla and Walcott were all very disappointing. It is very rare for me to leave any game we've won feeling frustrated. Perhaps it's a sign of how much they've improved this calendar year.
The second goal finally came with Ozil at last making some kind of positive contribution. Jack succeeded where Ramsey had failed by slotting home a simple tap-in. It was just reward for Wilshere.
The win puts us with one foot in the next round. Going to Naples knowing that anything other than a defeat by 3 goals will see us through means that it would take a collapse of Tottenham proportions to go out. Games like the one at Bradford last year should be cited to the players in terms of the need to not be complacent. I wasn't happy with Arsene Wenger implying that he will need to rest players in the next fortnight in order to be ready for Napoli - the Premier League must be the priority above anything else for this team. To have 12 points and not be certain of going through is a big surprise, but if we lose by those 3 goals in a couple of weeks from now we will not deserve to through in any case.
The other main talking point to come out of last night was Mathieu Flamini's decision to once again ignore the traditions of Arsenal Football Club. Taking a pair of scissors to his Arsenal shirt is a disgrace. It is well known that Arsenal's players wear whatever length of sleeve the Captain decides upon. It was unacceptable when it happened at Old Trafford (I went in to one over it on here the day after that, while the press only caught up a week later for some reason). To do it again showed a deliberate, flagrant disregard for Arsenal and the supporters.
I was delighted to see that Arsene Wenger has said it will not happen again. Clearly the Manager feels that Flamini has broken the Club rules. Flamini himself has said that he prefers to wear short sleeves and that he has done so in his ten years as a professional. I beg to differ. I have numerous Arsenal DVD's from Flamini's first spell at Arsenal and in none of the games where the players are in long sleeved shirts has he cut his off. The Captain's of the Club in that time were Patrick Vieira and Thierry Henry, with Dennis Bergkamp and Gilberto filling in when they were absent. What Flamini has done in his last two games is show disrespect to Thomas Vermaelen and Per Mertesacker. What exactly is wrong with just rolling up the sleeves as Theo Walcott and Olivier Giroud do? Lee Dixon, to his credit, has Tweeted about that very thing today and he was one who also used to roll up the sleeves, while all the while accepting the decision of Tony Adams/Paul Davis/Steve Bould (and calling "long-sleeves" himself in his spell as vice-captain) that he should wear the same as everyone else.
A lot of fans on Twitter have surprised me by not being bothered about Flamini's shirt. The reason I'm surprised is that many of these supporters regularly cite Arsenal's class and how we are a cut above because of it. One of those classy things is, for me, the way the players all dress the same on the pitch. It sets our team apart from everyone else. Obviously everyone is entitled to their opinion, but I find it an odd stance. For me the players should do as the Captain tells them. If you look the part, you might just play with the necessary pride. I look forward to Saturday and seeing what Flamini does, and whether Arsene Wenger instills the necessary discipline.
Posted by DvbrisG at Wednesday, November 27, 2013