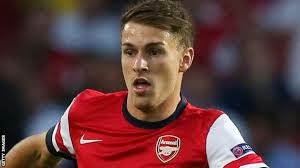 
The last time we played at Cardiff City was in the FA Cup a few years ago. Arsenal scraped a draw down in Wales and Eduardo did for the opposition in the replay on his first appearance since having his leg smashed. Before the game at Ninian Park that day most of the focus was on a very young teenager by the name of Aaron Ramsey who had left his hometown club the summer before for the bright lights of Arsenal. It would be fair to say that the occasion seemed to get to him at that time. Certainly he turned in a poor display in comparison to what we had seen from him on his previous fleeting first-team appearances. Tomorrow he goes back to Cardiff again, to a different stadium, a completely different player.
A lot has happened to Aaron Ramsey in the intervening years. Just as he was finding his feet at the top level he was cut down by Shawcross and missed virtually two years. As part of his journey to recovery he was loaned out to Nottingham Forest and back to Cardiff City again. I won't go over the long road he travelled with his form at Arsenal as I've said plenty on it over the last two years, most of it negative at times (though I am more than happy to have been proved wrong by Ramsey and I hope to be proved wrong about many other things at Arsenal by May). When he takes the field for Arsenal tomorrow he will not be the same callow youth that stepped out all those years ago. At the moment he is the top player in the Premier League, dominating from midfield and scoring more than his share of goals. The occasion will again be a big one but if anyone can handle the mental aspects of that then it is a lad who has gone through what Aaron Ramsey has. One more thing to note is that he got a mixed reception when he last played there for Arsenal. I suspect it will be much different tomorrow and the boy who became a man and was Captain of Wales will be welcomed back.
The game itself is a tough one for Arsenal. I would be reasonably pleased with a draw if someone offered it to me now. Cardiff and their intimidating supporters have turned their home into something of a fortress in the Premier League, despite the nonsense that pervades the Club in the boardroom. Man City left there empty handed while Man Utd could only draw last weekend, and would certainly have lost had Wayne Rooney been sent-off as he should have (if truth be told he should have been suspended for the game last Sunday as he also escaped a red card against Arsenal).
If there is one thing this Arsenal team has shown themselves able to do since February it is battle for everything. With the likes of Bellamy knocking about you know that battling will be very much required tomorrow. I would be happy enough to see Flamini keep his place ahead of Arteta (preferably with a proper sleeve) and Rosicky to stay in ahead of Cazorla. I can see Arsene Wenger playing both Flamini and Arteta but that is not something I want to happen. The aforementioned Aaron Ramsey is twice the player when left to play through the middle. Jack Wilshere has been doing just fine out on the right (even though I don't like players out of position) and I would keep him there tomorrow with Theo Walcott on the bench again.
Arsene said after the game on Tuesday that he will be looking to rotate a few players before we play Napoli. If that is going to happen then I hope it isn't tomorrow. I'm not a fan of "rotation" at any time, but if he's going to do it then Hull at home on Wednesday is a more obvious place to start. The players that do play need to be on their mettle and be prepared for a proper fight in a bear-pit of an atmosphere. If you bear in mind also that our next two games are being refereed by Lee Mason and Andre Marriner then you know we'll have our work cut out.