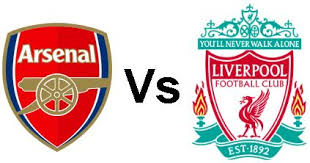 It's been a while since we were both on top
The next ten days will see Arsenal fans finding out whether or not we are genuinely in the hunt this season. We play Liverpool at home, and then Dortmund and Manchester United away. Given the chance right now I would take draws from all three fixtures. Defeats in all of them is a fate that doesn't bear thinking about. You just know that the media is longing for us to fail over the next week so that they can trot out their usual anti-Arsenal nonsense. It's up to a group of players who've done brilliantly so far to stand up and show that they might have what it takes.
The loss to Chelsea in midweek was almost a replica of the Dortmund game a week before. Our ability to make stupid individual errors in defence once again haunted us. At no level of the game can you afford to gift a 1-0 lead to quality and experienced opposition. Chelsea actually only had two efforts on target in the game, but we really only had one of any note, and we were 2-0 down by that stage (failing to test a 41 year-old goalkeeper who has hardly played in six months was criminal from Arsenal). Plenty of anger has been directed at Nicklas Bendtner, and people in attendance have told me he really let himself down with a complete lack of effort. Watching the game on a mobile phone I can only say that I saw a player getting no service from wide, such was the lack of desire to play a cross in to the box. At the same time we should consider that Bendtner has hardly set foot on a pitch in the last 18 months. Is he up to the required standard? Almost certainly not. However, in the absence of anyone else in the squad he is the only back-up to Olivier Giroud. We are almost certainly going to be reliant on Bendtner in a game or two before January. The constant cat-calling during his time on the pitch and general apathy towards him from the stands on Tuesday night is something we can all do without. In fairness I don't think he gets that bad a ride from the regulars, but those who go once in a blue moon, and watch Sky and Match Of The Day, are the ones who give him dogs abuse. I didn't see anyone getting on at Carl Jenkinson who was at fault for both goals, or Santi Cazorla who once again did next to nothing in his 90 minutes on the pitch. I also didn't hear anyone moaning that, at 2-0 down, we brought on the lesser spotted Ju Young Park and played him on the left wing, rather than go with two through the middle - the lack of tactics reared its head in defeat once again.
On to tomorrow and it's been a long time since Arsenal played Liverpool in a genuine top of the table clash. I stand to be corrected but the last time I remember us being this close together at the top of the table before a game was in March 1991 when David Seaman produced, for me, his greatest ever display before Paul Merson gave us a 1-0 win at Anfield. The home game that season ended in a 3-0 win for Arsenal so we'd all like a repeat of that.
Clearly a lot of focus will be on Luis Suarez tomorrow following the way things went in the transfer window. He's been in unbelievable form since he came back in to the Liverpool side so we have to hope he's due another meltdown. Suarez is simply an incredible player, probably the best in the Premier League. He carried Liverpool for most of last season, but the introduction of Daniel Sturridge has relieved some of that pressure. I've been surprised by Sturridge, but you can't argue with his record since January, and the goal he scored last week was top class. I mentioned how our individual errors at the back were costing us, and we have let in a lot of goals in spite of an apparent improvement in our back four. Tomorrow there is no room for any of these cock-ups. Concentration is the key, and the work of Arteta and Ramsey in front of the defence is crucial. If ever we needed Mathieu Flamini then tomorrow would have been it.
From Arsenal's point of view I want to see more from Mesut Ozil. As much as he has influenced the play, and the mood of the Club as a whole, since he arrived I can't help thinking he's been keeping things a little too simple. I don't mean that I want to see flashy flicks and stupid back-heels a la Arshavin. But I do want him to have a run at people every now and again. Ozil has the pace and the skill to take people on and cause them a different kind of problem. Obviously he is still feeling his way in to the Premier League but I think he can give us more. In the absence of the pace of Theo Walcott and Alex Oxlade-Chamberlain (losing them both at the same time has handicapped our attacking game badly) we need our star player to step up to the plate and dominate games. Without that pace out wide we need something special through the centre. Ozil is that something special and I want him to start proving it. Big players influence big games. We saw him do it against Napoli. Now he has to do it against Liverpool, Dortmund and Manchester United.