The task is clear 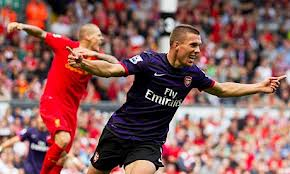 Some of this tomorrow would be nice

With three games to go Arsenal's target has to be nine points. Anything less than three victories and even the coveted fourth place trophy will slip away. There was a time when winning three games against bottom of the table dross might have been considered as a given. However, this current side is without a centre-forward and has shown it is able to lose to opponents even worse than QPR, Wigan and Newcastle. Of course three wins might still not be enough, but if Chelsea and Tottenham were to get the results they require to make that happen they would deserve their places, regardless of our end to the season.
Lukas Podolski looks set to continue as the lone striker tomorrow. In the absence of Olivier Giroud I think he represents our best option there, regardless of the fact that he's not a natural for the role. Given that the alternatives are Gervinho and Walcott I see no other choice. Naturally the whole team would be helped, whether Giroud is available or not, by a change to two men up front but that's not going to happen any time soon. I have to say I thought Podolski didn't do too badly against Manchester United last week and should, in theory, find things a little easier against Rangers tomorrow. Giroud will be more missed tomorrow in defensive areas - who in our side is going to challenge Chris Samba at a set-piece? Another thing to note is that Podolski actually has a pretty good record this season. Last Sunday was his first Premier League start since January, which puts his goals and assists tally in perspective. You also know that, by and large, if he gets a decent chance in front of goal the ball will end up in the net more often than not. If our players provide Podolski with the service to score goals tomorrow then he will deliver, I am sure.
The first half-hour last Sunday was outstanding from Arsenal. The players must produce the same tomorrow. Having dominated the best side in the country by closing down in packs and then springing forward from midfield at pace, just imagine what we can do to rubbish like QPR by playing like that. For me that's the key to our end of season. If we play with that intensity we will blow the opposition away. If we don't then we could have a repeat of a number of early season displays like Norwich away, for example. I see no reason to recall Jack Wilshere to the starting line-up. The midfield from last week did really well. The only change I would be interested in from an attacking point of view would be for Alex Oxlade-Chamberlain to come in for Theo Walcott.
With QPR down they have nothing to play for other than a bit of pride. I suspect Redknapp will have them seriously fired up to play Arsenal. It's his last chance for at least a year to take on the big boys and he will be keen to give the Spurs fans something to cheer tomorrow. They have a number of big, powerful, individuals as well as one or two skilful mavericks like Taarabt. I fear Loic Remy who has clearly seen his spell at Loftus Road as a Premier League shop window. Koscielny and Mertesacker must be right on top of him from the off. Above all I fear our record at Loftus Road. Interspersed by a great win in 1990 and a big FA Cup thrashing in 2001 we have struggled badly at QPR over the years. These things play at you in the back of your mind, no matter how bad their current league campaign has been. Tomorrow we have to win. There is no other result that will suffice.