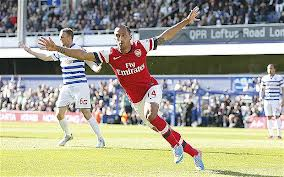 I don't mind winning 1-0. It doesn't do wonders for the heart rate but you get the same amount of points for it as you do if you win 6-1. If we win our two final games by the same margin, yet fail to finish in the Champions League places, then Chelsea and Spurs will deserve their positions ahead of us.
Winning 1-0 always puts a certain song in your head, and makes you think whimsically back to the European success under George Graham. Those games were won on hard work and tactical genius, of course. Yesterday's performance, however, was a little bit frightening. Having scored inside thirty seconds we never again carried a genuine threat in the match. We should have been swatting aside 'Arry's boys, especially with such an early lead, but I thought we were awful. Still, 1-0 is all that matters once that final whistle is blown.
For me QPR were the better side for most of the game. Once they realised Arsenal weren't going to put any pressure on them by actually trying to score another goal Rangers got on top and had a few shots. On the rare occasions, largely late in the second half, where an Arsenal player did deign to shoot Robert Green looked predictably uncomfortable as a the ball came towards him. Why won't they do it more often? I could almost re-write the piece I posted on here last Monday after the Man Utd game. I'm genuinely fed up of watching the sideways passing across an opponent who realises they only need to string a few defenders along their eighteen yard line to stop us. You could look at almost any of the various Arsenal websites and forums and you will see the same discussion being had. Does Arsene Wenger see the same things we see? Surely he realises that the football currently being played is as far removed from the golden days of his reign as it's possible to be. It's slow and turgid and we go nowhere. We are unlikely to beat Wigan and Newcastle 1-0 so something has to change over the next ten days.
In the game yesterday I thought Rosicky and Podolski really let themselves down. Last week Rosicky was going at defenders and making things happen in between the lines, but yesterday he did nothing whatsoever. Podolski, meanwhile, offered nothing to the team. On the rare occasion that Theo Walcott wasn't mis-controlling the ball when beyond the last defender Podolski was making no runs to assist him. A couple of times in the first twenty minutes Theo shaped to play a ball across goal only to see Podolski standing still on the edge of the area. I've stopped short of criticising Podolski all season but yesterday I thought he was awful. I would have replaced both of them at half-time and got Oxlade-Chamberlain and Wilshere on the pitch. When they did come on we had our best spell of the game, for me.
In midfield I thought Mikel Arteta was superb yesterday. Aaron Ramsey ran around plenty but gave the ball to the bloke in the front row of the stand more often than not. Arteta was everywhere though. He made more than his share of tackles and basically played them on his own in there, with Cazorla fairly anonymous out wide and Theo busy being Theo. By and large I think Arteta has had a fine season, playing in a role to which he is far from suited. For someone so small he is not afraid to put his foot in, even after getting nailed by a certain red-card challenge from M'Bia early on in the game (another storming referee appointment is Mr Moss). Without Arteta yesterday we simply wouldn't have won the game.
My man of the match was Wojciech Szczesny. In the last two games he has done extremely well. Quite how Theo Walcott got the official award I suppose only an idiot like Chris Waddle could tell you. Aside from the outstanding late save to deny the impressive Loic Remy I felt the Pole's handling was assured for the first time in a long while. He also dealt decisively with some well delivered corners, and one huge paw of the ball to take it off Remy's head was as important as the later save. I suspect Szczesny will be busy in each of the remaining fixtures against sides who will be desperate for the points. It seems unlikely that Fabianski will be back to take his place so he will have to stay focused and keep up his current form.
By the way, have you seen that idiot chimp Bale being interviewed after the Spurs game yesterday? I think the praise has been going to his head. Either that or he lost a bet and had to wear that stupid hat. Frankly, he looked more like he should be advertising tea-bags than playing Premier League football. Unfortunately he keeps scoring winning goals.