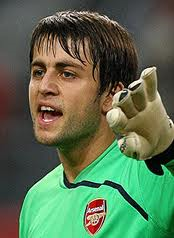 
It's that time of the year when I have to get in to rampant space-filling. We're two months away from the next Arsenal fixture which means I have to come up with some ideas for what to write about. I actually have a few things that are going to appear on the site throughout June and leading up to pre-season. As is traditional I will kick off this period of inactivity with a review of each player to have represented the first-team this season. We'll start with the goalkeepers.

Wojciech Szczesny
Szczesny began this season as the undisputed first-choice. Unfortunately that was probably the beginning of our problems. Since February last year Szczesny had actually been awful. Mistake had followed mistake with the confident Pole and it was costing us goals in many games. He picked up an injury early in the season but, with nobody to come in who was capable of replacing him, Szczesny immediately came back in when considered fit. That lasted for all of one game until it was realised he was unfit yet again. When Szczesny did play he was generally poor, mixing the odd fine save with far too many errors.
It would be fair to say that, until the last ten to twelve games, Szczesny wasn't assisted by great defending from those in front of him. You could argue that most goalkeepers would struggle behind that kind of standard of play. However, his own goalkeeping mistakes were awful. Szczesny has a serious weakness when facing direct free-kicks - he constantly gives the opponent too much of the goal to aim at. There is a strong argument that the Arsenal approach to coaching here is an issue as all of our goalkeepers seem to make the same mistakes all the time. But all in all Szczesny has had a poor fifteen months. Accusations from his father that Arsene Wenger has mis-treated Wojciech this season are wide of the mark in my view.
Having said all of that, his performances against Man Utd and QPR were very good and showed promise in his game for the first time in a long time. Is he good enough to be Arsenal's goalkeeper in the future? I think not, but if he proves me wrong I'd be delighted.

Vito Mannone
Having been loaned out last season it seemed certain that Vito's Arsenal career was over. He looked likely to join Hull before the campaign started only for Steve Bruce to look elsewhere in the end. What is certain is that Arsene Wenger was prepared to let him go. What a shock it was, then, that Vito ended up playing a number of first-team games in the Autumn as Szczesny struggled with injury.
Vito was inconsistent, at best, in the Arsenal goal. Ultimately he's just not good enough to play for a Premier League side that has ambitions to be successful. He mixes some fine saves, and decent performances, with the sort of mistakes in his handling that you'd associate with a Sunday League player. He's done well to play so many games at the top level for Arsenal and he will surely have a decent future at a half-decent side. I suspect that he's finally played his last game for us and I wish him well.

Damien Martinez
With Szczesny and Fabianski injured, and Mannone donning the gloves in the Premier League, the young Argentine got the League Cup nod. He did well in the game against Coventry City and looked like a goalkeeper who could command his penalty area. I was seriously impressed by him that night and thought he would be a much better bet than Mannone in the first-team. There was one save he made that night where he showed such assured handling that he simply looked the business.
When it came to the game at Reading Martinez was once again between the sticks. Sadly he didn't cover himself in glory that night, but he certainly wasn't alone. He made one fairly serious error when his acrobatic attempt to push a shot round the post saw the ball simply loop off his hand in to the net. Unfortunately for Martinez that was the last we saw of him this term. He didn't play too many U21 games towards the end of the season either, with Fabianski involved in some of them as he returned to fitness. For me, Martinez showed enough promise to be worth promotion to the first-team squad for next season in place of Mannone. However, he is also going to come under pressure from another youngster in the shape of Dejan Iliev, who seems to be highly fancied by the Academy coaches.

James Shea
Once again James Shea made the bench for a number of "minor" first-team games. Sadly for the youngster his career highlight remains being asked to train with the England squad at London Colney a couple of years back. Shea will be released this Summer.

Lukasz Fabianski
What a renaissance for Fabianski. He may have only played a handful of games before Grant Holt seemingly ended his Arsenal career with an elbow to the ribs, but his contribution to Arsenal's successful run-in should not be under-estimated. Yes, Arsene Wenger took a gamble in bringing him back to the side against Bayern Munich, but he was in top form straight away. The saves he made, and the confidence he seemed to inspire in those in front of him, was in stark contrast to what had gone before with Szczesny.
If you look at the last couple of years of Fabianski's career he must surely be the most unfortunate player around. He had just secured himself the first-choice position with a string of fine displays when he suffered a shoulder injury that allowed Szczesny to cement his own position. Last Summer he got injured in the days before Euro 2012 and was robbed of the chance to replace the same goalkeeper in front of a home crowd in a major tournament. Then this season, having fought back to fitness and got to the front of the queue once more, he was again struck down by injury. You just wonder if, having got a decent run, could Fabianski have fulfilled the potential he showed when he first arrived at Arsenal? I suspect he is on his way out now, so we will never know. What I will remember is his celebration after our third goal against Norwich when he ran all the way up the pitch punching the air, and his reaction to the final whistle at Newcastle last Sunday. He is clearly a team man and a Gooner. If this is where it ends then I want to say thanks.

As with the last five or six years Arsenal fans can see the need for some quality in this area. With Fabianski and Mannone seemingly on the way out, and Szczesny indifferent, at least one top signing is needed. Links with Pepe Reina and Victor Valdes are not inspiring. I'd far prefer to see Begovic arrive from Stoke or Mignolet from Sunderland. They would, at the very least, put Szczesny on his toes.
Posted by DvbrisG at Thursday, May 23, 2013