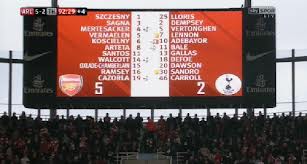 Let's all laugh at Tottenham


For the first 15 minutes yesterday we were in trouble. If we'd been a couple of goals behind there really couldn't have been much of a complaint. I don't know what Mertesacker and Sagna were up to for the Tottenham goal but it was defending of the worst kind. First of all it was a crazy situation from which to try and play offside, but to do it without communication with the other two defenders was even worse. Szczesny made a very good save to deny the ever greedy Defoe, but that idiot Adebayor showed what can happen when you have two up front. The reaction of those two players to the goal summed up their total lack of class. How Howard Webb failed to book them for vaulting the barrier to goad the Arsenal fans was unbelievable. I seem to remember Adebayor getting in to trouble a couple of years back for baiting the Arsenal fans after scoring a goal, and he really should be looking at a ban for doing it yet again.
The behaviour of the Spurs players, however, was nothing to what I witnessed from members of their "firm" before kick-off. I happened to be on Drayton Park about fifteen minutes before kick-off and was one of many Arsenal fans trying to avoid a mob of scumbags as they marched towards the away end. These cretinous idiots, mostly in their 40s I would say, clearly thought they were back in the early 1980s. Old people and people with young children were fair game to these fools. One of them who approached a man just to my right had a look of sheer hatred on his face that I have never witnessed before. Fortunately this lot were mostly mouth. Further up the road, outside the All Arsenal shop, it was starting to go off properly. Two police horses, from my vantage point, actually entered the shop and came back out again in an attempt to stop the Tottenham hooligans from getting in there. The Arsenal fans, meanwhile, were holding their own on the steps to the North Bank Bridge and, as the Spurs mob made its way up Drayton Park, the Gooners were flooding over the steps to get after them. The lack of police was unbelievable given that the helicopter was hovering right above the incident. We all know that football hooliganism is not really a thing of the past, but it usually only involves those that want to be a part of it. The problem with Tottenham is that their clowns are indiscriminate. Whereas most "firms" will only fight with like-minded people, the Spuds have no qualms about going after anyone who isn't a moronic cretin bearing a picture of a chicken balancing on a basketball. I believe Arsenal's "Herd" was out in force yesterday, so I suspect somewhere or other the Tottenham cretins got what they usually get in N5, and a damn good pasting. After seeing the way they wanted to go after "scarfers" I have no sympathy whatsoever. I am someone who goes to football to watch the game. If I wanted to get involved in all that crap then I'd be fair game. As I say, it seems to be largely just the Spuds that target just about anyone.
Back to the game, and Adebayor continued to show what a lowlife he is by trying to break the leg of Santi Cazorla. It was as clear a red card as you will ever see. I must give Howard Webb credit for his handling of the incident as he took his time in order to diffuse the situation. I loved the way Jack Wilshere scared the life out of the diving chimp Bale who was all the big man until Jack turned round to face him. Bale's "hold me back boys" posturing was laughable. As turning points go this was a massive one. Spurs were so far on top at that stage that I couldn't see how we were going to get back in to it. The red card saw them thrown in to disarray while the Arsenal players suddenly woke up. I imagine the Spurs fans will now start to hound Adebayor out of the Club after he cost them so dearly in their annual Cup Final.
Something that I find very encouraging is the reaction of Cazorla to the challenge. I can think of many small flair players over the years that would have disappeared for the rest of the game after such a kick, but the little Spaniard decided he was having none of it. He went on to rediscover the form we saw earlier in the season as he tormented the Tiny Totts midfield and defenders for the rest of the game. I have been highly critical of Cazorla in recent weeks, but yesterday he worked hard when we didn't have the ball, and dominated the game when we had possession. Cazorla's energetic display should also put an end to any nonsense we hear about players being tired after a midweek trip to play in Europe - Santi went to Panama and back this week. 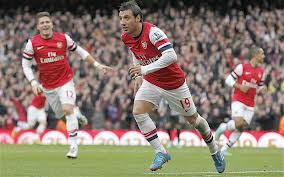 
Theo Walcott was the man who got us back on the front foot as he destroyed Kyle Naughton for the rest of the first-half. It was a fantastic display from Theo and I have to say that I really want him to sign a new contract. I imagine a few regular readers will be wondering if someone has taken over the blog after such a statement, but Theo has become crucial to this team and his form has been outstanding since August. We have haggled over the odd few grand in the past and ended up losing out as a result. Whatever you think about Ashley Cole and his greed, the fact is that it was a measly (in football terms) £5000 a week that saw the World's best full-back leave us. For the sake of what doesn't amount to much more can we really afford to lose Theo Walcott just when he is looking capable of being the player we always wanted him to be? His goal in the final minute was just reward for his fantastic performance.
It was Walcott's super play out wide that set up the first goal, but what a header that was by Per Mertesacker. The BFG might have been badly at fault for Tottenham's opener, but he certainly paid back the fans with his goal. The way the ball seemed to fly further than it had a right to was reminiscent of David Platt's headed winner against Manchester United in November 1997. Mertesacker's reaction was great as well as he really showed what it meant to him to score his first goal for Arsenal.
From that point on, until Bale's goal in the second half, Arsenal were outstanding going forward. The second goal may have had an element of fortune but nobody could say it wasn't deserved (except for Andre Villas Boas - more of which below). What Podolski showed, again, was a natural ability in the penalty area. He also showed that, if you actually have a shot, it might just bobble in somehow. To then get a third goal before half-time, and underline our dominance, was massive. What a goal it was. Again Webb did well by offering a fine advantage to Cazorla whose square ball in to the area was converted in real centre-forward style by Giroud at the near-post. The French striker was being fouled by Vertonghen who seemed to want to be Spurs' own Andre Santos and swap shirts with Giroud at half-time, such was the grip he had on him. I doubt a penalty would have been forthcoming (as it wasn't at 4-1 when Dawson felled Wilshere in the box) so the ball hitting the net was crucial. It was a stunning finish, and Giroud's all round performance will further silence many critics, myself included.
The second-half saw Arsenal at once being excellent and wasteful. Cazorla's goal was another peach, but other opportunities were spurned. With our defending I never felt safe, even at 4-1, so when Bale scored I was worried. The jitters set in both on the field and off it for Arsenal. It is something that shouldn't happen, but for ten minutes we were rocking a little. When we eventually remembered how to keep the ball for a minute or two we finally drew the last of Tottenham's sting. Arsene's decision to bring on Ramsey and Santos was a large cause of us losing our way, but such criticisms can be saved for another day - this is an afternoon to bask in the glow of another Spurs hammering. It could (should) have been a humiliation, but I'll take the 5-2 thanks very much. 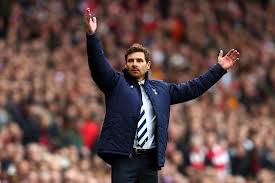 The new Minister Of Information in Iraq?


One final thing before I wrap up is to comment on the interview I heard with Andre Villas-Boas on Radio 5. According to AVB Spurs dominated the game "from the first minute to the last". It sounded very much like the musings of a mad man, and I'm sure anyone who actually saw the game will be at a loss as to what he was talking about. I can understand him wanting to protect his players from criticism and all that, but this was ridiculous. I was sitting in the car listening to it and was immediately put in mind of Saddam Hussein's Comical Ali telling journalists that Baghdad was still in their control as the American tanks rolled by in the background. Years ago I used to enjoy Arsene Wenger's one-liners in response the rubbish that Ferguson used to spout. Yesterday he produced a return to those good old days with this response when told of Villas-Boas' comments:


"If our opponents are in control from the first to the last minutes and we win 5-2, then I don't mind too much."
I think that's something we can all agree on.
﻿
Posted by DvbrisG at Sunday, November 18, 2012

Email ThisBlogThis!Share to TwitterShare to FacebookShare to Pinterest
Labels: hiknk