A serious character flaw shows Arsenal up as losers 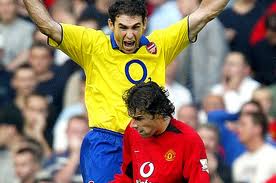 No hugs and handshakes if this man was still around


Andre Santos has borne the brunt of the criticism from Saturday as a result of him getting Robin Van Persie's shirt at half-time. Santos' behaviour merely served to underline how much awareness Arsenal's footballers have of the will of the supporters. I'm not having this crap about how Brazilians often swap shirts at half-time. Santos is playing in England now and he should have been acutely aware that such a gesture would only rile the Arsenal fans - when in Rome, and all that. Given that he has been getting serious stick for his abject defensive displays since he came in to the side you would think he'd be showing a little bit more intelligence than that. I've defended Santos a bit on here as I don't like the way a lot of Arsenal supporters pick a player as the fall-guy to get abused, but no more. It's always happened with Arsenal for generations. For people of my generation you can go back through Tommy Caton, Gus Caesar, Martin Hayes, Perry Groves, Lee Dixon, Kevin Campbell, Andy Linighan, David Hillier, Gilles Grimandi, Pascal Cygan, Emmanuel Eboue, Nicklas Bendtner, and now it's Aaron Ramsey and Santos in the frame. Before that were the likes of Blockley and Sammels and Ian Ure - the North Bank has a long history of going after its own. As I say, it's not something I like. However, after doing what he did on Saturday I have little sympathy for Santos. I would never advocate the booing and abuse of an Arsenal player. I find such things sickening. Having said that, I will not be singing anything in support of Santos after what he did the other day. How stupid do you have to be to think that such a thing is acceptable? Wenger has said he wasn't happy with what happened, but I bet he's not about to drop the hapless Brazillian tomorrow night.
In fairness to Andre Santos his behaviour is merely indicative of a wider problem with the Arsenal squad. They are simply too friendly with the opposition. I remember last year when Alex Song walked off the pitch at St James' Park arm in arm with Joey Barton, despite him play-acting to get Gervinho sent off. On Saturday we saw the players all shaking hands and hugging Robin Van Persie in the tunnel before the game. Why? Why would you do that if you're about to go in for ninety minutes of serious competition? If you want to give the guy a warm handshake then do it after you've marked him out of the game and not let him had a kick all match. Even better, show no friendship (in public at least) whatsoever to a man who ran out on Arsenal in the Summer after telling everyone how bad the players were that he was leaving behind. Make no mistake, that is exactly what Van Persie was doing in his "statement" - he was basically saying, "This lot are useless and I won't win a thing with players like this." Now that might have been fair comment, but if a team mate said those things about me I'd like to think my attitude before facing him would be to show him what a w****r he is before rubbing his face in it after I'd won. I remember well how Jason MacAteer humiliated Roy Keane in a game at Sunderland after he had slagged the Republic of Ireland 2002 World Cup squad in his autobiography. MacAteer had no time for a man who had shown him such disrespect and was motivated enough to do something about it when they came face to face. Instead of that we had players falling over themselves to show they were Van Persie's best buddy (only Bacary Sagna escapes criticism in that regard).
The behaviour of the Arsenal players towards Van Persie simply underlines to me that they are nothing more than a bunch of losers. Winners are not nice to people like Van Persie. Winners go after people like him and show them who is boss. Winners don't lie down and allow people like him to dominate them. Do you think for one second that David Seaman, Martin Keown, Tony Adams, Patrick Vieira, Dennis Bergkamp or Thierry Henry would have been hugging Van Persie? Do you think Frank McLintock would have been allowing himself to be bullied by Van Persie throughout the game like our current skipper was? When Vieira came back to play against Arsenal with Juventus there was no warmth from the players towards him until after we'd won the game 2-0, and that was reciprocated by Vieira himself. Pires and Henry did their talking on the pitch against Vieira, and then shook his hand and took his shirt after he'd been outplayed. That's how it should be. The difference is that all the players I've named there were winners. Not one member of the Arsenal squad has ever been a winner. Van Persie himself wouldn't have been all matey with someone in the same situation, because he has the nastiness required to be the best - which is exactly what he is, I'm sad to say. Until Arsenal's footballers learn that nice guys win nothing we will continue to fail, and will continue to be embarrassed on trips to Old Trafford and the like.

I'll preview the Schalke match in the morning. The team news is largely depressing, but that's nothing to be surprised about I suppose.
Posted by DvbrisG at Monday, November 05, 2012