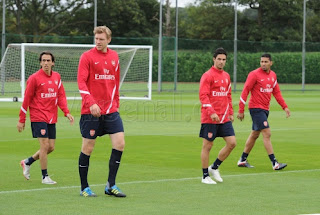 New boys in the thick of it tomorrow

Finally the international nonsense is over and we can get back to some real football. I apologise for not writing anything at all this past week. My absence wasn't merely down to the lack of Arsenal news this week but more to do with work. You might recall that I said I would struggle to post regularly over a seven week period and we are definitely in to that stretch now! As ever I will do my best to post whenever it is possible for me to do so but during the week that's going to be hard for the next month. When there are games in midweek I will certainly post some pieces, though my attendance at evening games is out of the window for the next four weeks now as there is no way I can get to Highbury in time for the game. Sadly that will mean missing Shrewsbury and Olympiakos at least. Anyway, onwards and upwards, and that is exactly what Arsenal must do, starting tomorrow.
Whether or not you like the idea (and I certainly don't like it) that the season really begins tomorrow, for Arsenal I believe that is what we must now think. The nonsense we saw at Old Trafford seems a long time ago and I expect Arsenal will take the field tomorrow with at least two of the new signings in the starting eleven.
We know that Mertesacker will play (I am non-plussed by Wenger's assertion today that he was signed because he knew Vermaelen would be out - does that mean he thought we had enough central defenders before TV5 got injured?)  I fully expect Koscielny to keep his place alongside the giant German, ahead of Johan Djourou. Andre Santos will not play, according to Arsene, as he has had no football since the Copa America - he looks at least half-a-stone overweight in the photos on the official website. That means Kieran Gibbs will return to the side as he is fit for the next 24 hours - God knows who would have played at left-back if he was injured. Bacary Sagna is back in place of the suspended Carl Jenkinson.
In midfield Emmanuel Frimpong is back from the suspension he served for the ridiculous red card he got at home to Liverpool (there still hasn't been an explanation from the odious Martin Atkinson or the FA for his first yellow card that day). Alex Song remains suspended, as does Gervinho. Aaron Ramsey will most likely line up alongside Frimpong with Mikel Arteta getting his debut in front of them. Tomas Rosicky is struggling with a knee injury, but I'd rather see the new £10m man getting the nod in any case. Rosicky has done okay so far this season (not much competition, I know) but when you pay big money for someone it is important that they play from the off.
Robin Van Persie will obviously keep his place up top, with Walcott playing on the right, if fit. I was very impressed by Alex Oxlade-Chamberlain in midweek (I know it was only U21's) and I would certainly not complain if he came in for Theo, regardless of any injury to Walcott. Arshavin seems favourite to play from the left (ahead of Ryo Miyaichi) but we'll have to wait and see what the Manager does with that one. I also wouldn't be averse to Theo playing on the left if Chamberlain came in on the right.
The importance of winning tomorrow, and winning well, can not be underestimated. There is massive pressure on the players to produce something after what happened a fortnight ago. Their recent record against teams they are expected to wipe the floor with has been disgraceful. Too many times we have come away from games like tomorrow with tails firmly between legs. I dread to think how nasty the atmosphere could become if Swansea take the lead. There is talk of protests from some groups before the game tomorrow, but this really is not the time for that kind of thing. The players need the support of the fans right now so I urge everyone to get behind them. An early goal or two (or three) would go a long way to damping down some of the fires that have been springing up, metaphorically, around the Club in recent weeks. We all need to be picked up off the footballing floor and a win at home tomorrow would be the start of that, even if the road ahead is still a very long and daunting one for Gooners today.


I'll post a match review either tomorrow night or on Sunday.
Posted by DvbrisG at Friday, September 09, 2011