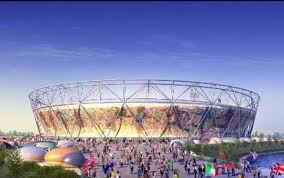 Tottenham's field of dreams - best keep on dreaming
So it looks like Tottenham will be staying at White Hart Lane for a little while longer. It seems that the Olympic Legacy people have recommended West Ham's bid to take over the Olympic Stadium after the games are finished. I am pleased that common sense has prevailed. It will please the majority of Spurs fans too, I'm sure, as a move away from North London was something most of them really didn't want.
From an Arsenal point of view it's all rather amusing. Daniel Levy wanted to get the Spuds a 60,000 seat stadium on the cheap, knowing that there is no way a similar sized ground could be built or developed anywhere near White Hart Lane. Having been through our own stadium design/building project the Arsenal fans know exactly what hoops you have to get through to build a major stadium in a built-up area in London. Arsenal have four tube stations (one is not allowed to be used on matchday) and two railway stations (again, one not allowed to be used on matchday) on the doorstep. Spurs' nearest Underground is Seven Sisters - bloody miles away from the Lane. With the whole environmental agenda (complete nonsense) there is no way that massive car-parking areas would be allowed in London - even if the road network was up to it (it isn't), so public transport links are imperative. As Tottenham are in an area without good transport their plans to redevelop White Hart Lane were always pie in the sky. Levy and co were using them as a sop to the fans to fool them in to thinking they could compete with Arsenal again. Arsenal also had to guarantee affordable housing in the area and build a new recycling and waste disposal facility to replace the one where the stadium now stands. Levy knew that a new stadium in Tottenham would not be possible when push came to shove - never mind the fact that financing it in the current climate would be near impossible.
Last week Daniel Levy stated that Tottenham had no plan B should they not be allocated the Olympic Stadium, finally admitting that building at the Lane was not viable in any way. So what next for Spurs? Basically, if they are serious about building a new ground they will have to leave the urban sprawl and head outside the M25. If they have simply been posturing to keep the fans happy then they will have to stay at White Hart Lane with a capacity of less than 40,000.
Had Spurs got their wish and taken over in Stratford then ENIC would have stood to make a lot of money. Now, with that project appearing to have gone out of the window, we will have to wait and see if they are serious about playing with the big boys, or if they were really just in it for the easy dollar.

Hopefully there will be some news from Arsenal tomorrow morning ahead of the Wolves game. A number of the first-team played in the international matches last night so fingers crossed that injuries are few and far between. Tomas Rosicky got a goal last night for the Czech Republic in the shock of the evening - maybe he'll go on something of a run now...or possibly not.