Unai Arrives at Arsenal - "Those who know...", Squad Review Part One - Goalkeepers 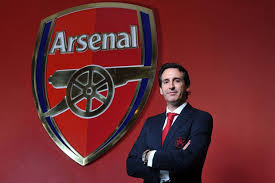 It's been a momentous few days for Arsenal Football Club. For the first time in 22 years we have a new leader of the team. It's been quite surreal and almost disturbing, a genuine step in to the unknown for the newest generation of Arsenal supporters. For those of us who are old enough to remember what it was like before Wenger it has still been very odd indeed.
One of the absolute highlights of the week has been the skewering of every slimy journalist and all the "in the knows" on the internet by Ivan Gazidis using his man Ornstein on the BBC the other night to reveal Unai Emery was to be the new Arsenal Manager. I believe Steve Stammers had actually broken the story earlier in the day and he is a proper sports writer who has long been a regular Arsenal man. The whole Arteta thing had not so much been a red herring as more the biggest smokescreen in football. It almost put the Sol Campbell deal in the shade. I particularly enjoyed the "Those who know won't speak and those who speak don't know" slapping down of the media by Uncle Ivan yesterday. Gazidis is a man who is mostly unpopular with the fans at Arsenal but you have to say he's played a blinder here. That quote would have been a t-shirt waiting to be made back in the 90's when you could buy some really great stuff from the stalls on Gillespie Road and Avenell Road. It was all very Arsenal. In terms of the "catalyst for change" that Gazidis uttered last year you can't say he hasn't delivered. The next stage will show us whether his changes have been good or bad. I, for one, am more than willing to join in and find out.
Unai Emery handled himself superbly in the press conference yesterday. Clearly his English is not as strong as Arsene Wenger's was when he arrived but he carried out his media duties brilliantly in a foreign tongue. Somehow I can't see Allardyce or Redknapp or whoever rocking up in Spain and giving a press conference anything like that. Emery looked the business in his Arsenal suit and looked genuinely pleased to be at The Arsenal. There was a touch of class in Arsenal already having his name plaque up outside his office at the stadium. He spoke about work a lot in his answers to the journalists and I think that will be music to all our ears. I am convinced that certain players are going to have to shape up or ship out. I know his record from Sevilla and PSG but not much else. His "failure" at PSG was in the Champions League but you could aim that at Guardiola at Man City the last two years as well. If I have a concern it's that his only league championship came in the French league with a side that anyone could have managed to the title. That being said, I am encouraged that he is used to winning and will not accept slacking. He has dealt with far bigger egos than Mesut Ozil or Aaron Ramsey or Pierre-Emerick Aubameyang. It is now an exciting time ahead for us. Whatever happens it will be different, and that difference brings hope and a step in to the unknown. Welcome Unai Emery.

The annual squad review will take the usual form with a few words on every player to make the match day squad this season, and one or two others who didn't. I'll start, as ever, with the goalkeepers:

Petr Cech
The undisputed first-choice for at least most of the season but it wasn't a vintage year for the veteran. Like David Seaman before him Cech is starting to show his age. He lacks mobility and agility. His positioning still gets him in the right place to make a lot of very good saves, but the weaknesses are there for all to see. Towards the end of the campaign he was nursed through as clearly he has been carrying an injury for some time. I would have preferred to have him in goal for the UEFA Cup games with Atletico and, who knows, he might have made a difference. For me he should be 2nd or 3rd choice next season but he's just been moved to the number 1 shirt.

David Ospina
He's had an odd Arsenal career where he's ended up playing a lot despite being first-choice for only a very brief spell. I like Ospina and he seems genuinely pleased to be an Arsenal player. However, he is really not that close to being a truly top class goalkeeper. He's been a decent signing as the understudy since the last World Cup but the time has surely come to move on. He doesn't inspire confidence in those who play in front of him  and certainly not in the fans.

Emi Martinez
Spent the entire season on loan in Spain and hardly played. For a lad who seemed to have great potential and who wants to make it at Arsenal that must have been a disaster for him. What will the new Manager do?

Matt Macey
For the rest of his life he can say he played for Arsenal. Macey made his debut against Norwich and also got some experience in Europe, making a couple of crucial saves in the process. At his age he's not likely to make it but I'm sure he enjoyed his year in the Arsenal first-team squad.

Dejan Iliev
On the bench against Norwich he was highly rated before some bad injuries kept him out for a long time a couple of years ago. We are not short of young goalkeepers at Arsenal and some of them hardly get a game, Iliev included.
Posted by DvbrisG at Thursday, May 24, 2018