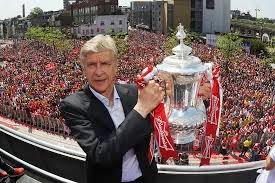 Arsene with his most won silverware

I'll take this chance to do my "awards" for the season as I have a few more minutes available.

Player of the Season
I was thinking I have really three options for this in Monreal, Ramsey and Aubameyang. Until about six weeks ago Nacho would have walked it. However, having given it some objective thought I have decided that my player of the season ought to be someone who was written off last year. A man who had no future at Arsenal it would seem. A man who would end up being Arsenal Captain on more than one occasion and who would drive the team forward when he played and a character who absolutely gets what it is to be The Arsenal. My player of the year is Jack Wilshere.

Goal of the Season
Easy one this, it has to be Aaron Ramsey's back-heel volley against CSKA Moscow.

Most Disappointing Player
Joint winners here for differing reasons. Firstly, and this will be no surprise to anyone who reads my stuff regularly, Mesut Ozil. For six weeks around December and January he was sensational, everything we know he is capable of being. Unfortunately circumstances and his form saw the Board feel it necessary to make sure he didn't leave with Alexis and he was given a huge salary to stay at Arsenal. He's been an utter disgrace ever since and doesn't even have to turn up if he doesn't feel like it. The other is Rob Holding who looked the absolute business in the FA Cup Final last season but, come the Charity Shield in August, turned in to a Sunday League defender. Having signed a new contract I'm convinced he'll be loaned out next season. Shout outs to Iwobi, Bellerin and Mustafi.

Most Improved Player
There was a possible shout for Granit Xhaka here over the last couple of months of the season but the clear winner is Calum Chambers. I thought his Arsenal career was over this time last year but, since Christmas, he has proven to be Arsenal's best centre-back. You could argue that doesn't mean much in view of the competition but he has shown more than enough to deserve an opportunity when the new man comes in. Expect him to be sold in July.

Best Team Performance
Burnley at home? Man Utd at home despite losing? No. It has to be the Tottenham home game. A 2-0 thrashing for the greatest team in English football history. Arsenal played them off the pitch from start to finish and the shadow is still a long one.

Worst Team Performance
Where should we start? Talk about plenty of options. For me it has to be Liverpool away at the start of the season. Wenger got everything wrong, not least the decision to play Oxlade-Chamberlain who he knew would be joining them within hours! Arsenal were beaten before they went on the pitch that day and Liverpool ended up easing off or it could have been another Old Trafford style humiliation.

Surprise Package
Not a lot has surprised us this season to be fair. That being the case I'll go for the emergence of Ainsley Maitland-Niles. If he can keep his head level he might just have a big future at Arsenal. Wenger going could be the best thing that happens to him as someone new might just give him a position and keep him there.

Moment of the Season
No it isn't Wenger's announcement! It is, however, Wenger's final game at home. Him being presented with the Invincible Premier League trophy marked the Club out for the class it possesses and it was a very emotional and special day of thanks for all the stuff I wrote about above. The players turned in a Wengeresque performance to hammer Burnley and the man himself said goodbye in an eloquent and fitting manner.