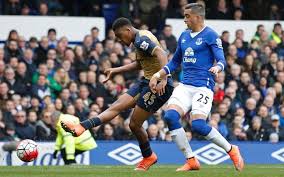 A repeat of this will do tonight

Last year at Christmas Arsenal travelled to Southampton who were in a terrible run of form. What followed was a four goal thrashing for our lot in a game that could have been double figures, we were that bad. Now tonight, twelve days from Christmas again, we face Ronald Koeman's new team Everton who are in a similar run that Saints were this time last year. We have to hope that Arsenal treat this fixture with a little more respect and commitment than we saw at St Mary's last Boxing Day. Our form going in to this game is also comparable to last year - we went to Southampton less than a week after beating Manchester City at home. Over the last ten days the team has put in three superb displays in beating West Ham, Basel and Stoke RFC. I don't like the omens ahead of tonight.
I've been a bit surprised by the lack of success Koeman has had so far at Goodison Park. Having said that, I was also surprised at how little was spent by Everton and their new owner back in the Summer. I think he will turn things round given the opportunity as he proved at Southampton he has the ability to get the best out of a very difficult situation. In Lukaku he has a player who can be unstoppable on his day, and can be a very "streaky" goalscorer in the mould of Kevin Campbell - the fact he scored on Saturday ought to have our defenders on their guard ahead of tonight.
Obviously Arsenal are missing Mustafi tonight following his injury at the weekend. Bellerin being back is a massive boost going towards the Christmas schedule, but Gabriel has never been truly convincing alongside Koscielny. I actually thought he did really well filling in for Bellerin, Debuchy and Jenkinson at full-back and maybe the confidence of a run in the side will serve him well as he will play a good few games in the next few weeks. I don't see too many other changes being made to the Arsenal team. We might see Gibbs come in for Monreal, I suppose, but there's really no point messing about too much given how well they played at the weekend - there is plenty of time between tonight and Sunday afternoon for recovery ahead of the trip to Manchester City.
Four points from the next two difficult matches, both away from home, has to be the realistic target. Winning at Everton would put us in a very decent position to achieve that aim. We have a decent record at Goodison Park, probably much better than most over recent years. There haven't been too many defeats up there, and a good few wins - some of them very convincing. Last season we went there straight after the Barcelona away defeat and put in one of our best performances of the season, with Iwobi and Welbeck to the fore.
The fact is that Arsenal must go out there this evening and play on the front foot once again. Do our pressing high up the pitch and win the ball in the Everton half. We must put pressure on their midfield as Gareth Barry will not be able to handle that. This is an Everton team that is struggling and we must back them up towards their own penalty area as much as possible. Create that pressure and the chances will come. Then it's up to our front four to exploit that and get us the win. It could be a very big week in our Title challenge.
Posted by DvbrisG at Tuesday, December 13, 2016