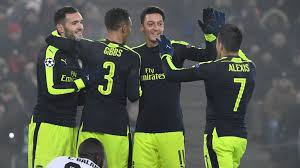 These four were superb in Switzerland

It's been a really good week since we lost to Southampton in the League Cup. The performances at West Ham and Basel have been as good as anything we've seen from Arsenal all season. There's been movement, passing with a purpose, even shots at goal. What there has also been, particularly at West Ham, is pressing higher up the pitch. Winning the ball back in the opposition half, as Coquelin did for the opening goal on Saturday, makes the whole job of beating opponents so much easier. Over the last few years our best performances and results have all been when we've played our football at the right end of the pitch. If our centre-halves aren't seeing too much of the ball when Arsenal are in possession then it means the team is playing well. Five goals on Saturday and another four last night have made for a perfect few days on the road. The opposition haven't been up to much, it must be said, but that hasn't always been reflected by Arsenal hammering them. In the last two games they've got it right and we have to hope that, unlike after Chelsea and Basel a couple of months ago, they keep it up now and get the results in December that we need if we are to challenge at the top.
Winning our group in the Champions League was an added bonus last night. It was totally unexpected after the game at home to Paris St Germain and you have to give credit where it is due. At the start of the campaign the objective had to be to win the group and that's been achieved. If it means we still get unlucky enough to draw Bayern Munich or whoever then there's nothing we can do about that. And if you can't enjoy Arsenal winning 4-1 away from home in Europe then that's your problem.
The way the goals came last night was also very satisfying. A couple of tap-ins for Lucas Perez showed that he might have some of the poachers instinct, followed by a nice right-foot finish across the goalkeeper to give him his hat-trick. After a slow start in terms of his playing time, and coming back from an injury, he will surely get a real boost from scoring his goals. He now has five goals and two assists from his limited appearances for Arsenal, and the hat-trick last night came from playing out of position on the right-wing. The fourth goal, however, is the one that will live in the memory. Ozil made a superb run in behind the defence (he was excellent last night) and the pass chipped over the top by Alexis was incredible. From there Ozil somehow knew exactly where Alex Iwobi was and presented him with a nice easy finish that hopefully gives him some confidence too - Iwobi's performance last night was also one of his better displays this season. All in all it was a very enjoyable way to spend a December night and followed on nicely from the exceptional Alexis-show on Saturday. That, in itself, was one of the best hat-tricks you will ever see and Arsenal must get him to sign a new contract as soon as possible.

The eagle-eyed reader among you will have noticed a new banner at the top of the page, and a new logo down the right. This site is privileged to be included in a new initiative to "cut through the noise" of Arsenal related news and views. The Highbury Library is providing a service that avoids the click-bait headlines and articles that adorn your news feeds and give you links directly to articles you might actually want to read, rather than the latest transfer lies designed exclusively to bring you to a site to read the adverts etc. All the major Arsenal sites are in there, and so am I! I'm grateful to the creators for the opportunity to be a part of this, and also for the creation of the logo that will now give this site it's own hallmark. Make The Highbury Library your first port of call for all your "real" Arsenal news and views.
Posted by DvbrisG at Wednesday, December 07, 2016