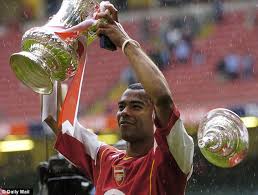 I'm off to Arsenal tomorrow to watch the Arsenal Legends v Milan Glorie game in aid of the Arsenal Foundation. I've been extremely annoyed all week that, having bought my tickets (along with most others) on the understanding that Thierry Henry and Dennis Bergkamp were going to be playing, neither are going to be there after all. I'm taking my two boys and wanted them to forever be able to say they saw the both of them play. Henry has got his new job with Belgium, having chosen to work for Sky rather than for Arsenal. Dennis, however, is also not going to be there but there has been no explanation as to why. Up until Wednesday (at least) Henry and Bergkamp photos were still forming part of the advertising, although their names were obviously left off the final list of sixteen former Arsenal players to be involved. I can seek solace in the fact that at least Pascal Cygan has been persuaded to play after being left out initially.
When the original advertising for this match was done back in May it seemed to me that maybe there had been a move to get the Invincibles team on the pitch for one last time. Patrick Vieira's new role in New York quickly ruled him out, but all the others were surely on the radar, albeit with one very notable exception - Ashley Cole. It's ten years this week since he left. The fact is that, almost no matter what the circumstances, Cole will never again wear an Arsenal shirt. He was even interviewed recently and stated he would like to work for Chelsea in the future, and not for Arsenal. No surprise, I guess, but it is Cole's determination to always talk negatively when referencing Arsenal that does him no favours.
I wrote in the Jack Wilshere piece the other night that Cole should have been the Arsenal Captain for many years. He had already developed in to the best full-back in the World before he left us, and he got better and better at Chelsea. It pains me to write that but it's true. We all know the feelings of most Arsenal supporters about Cashley, but it shouldn't be used to play down his achievements with us. He is the best left-back I've seen at Arsenal, he won trophies, never gave an inch, and had nerves of steel when taking a penalty. No other full-back has shackled Cristiano Ronaldo the way Cole did, both for club and country, throughout his career. Cole was too good for Ronaldo. Nobody else has been. Cole ought a legendary figure in the history of Arsenal, as are all the Invincibles, and maybe that should be recognised.
The unfortunate thing about Cashley is that he came to embody everything that was wrong about Chelsea and Mourniho. Did Arsenal renege on an "agreement" to pay him £70k per week? I think they probably did. Did that excuse the fact that he had already gone behind the back of Arsenal FC to talk with Mourinho and Chelsea in a move that was totally against the rules? Not in my book. I believe that Cole always knew that he would be forcing his way out of the club that had nurtured him from a small boy, keen to take Chelsea's money at the expense of moral judgement. The trophies he subsequently won with them obviously make an absolute justification for the move he made, but he must understand why Arsenal fans went for him the way we did. After the move he never missed the chance to have a dig at us. He even blamed us for his leaving as we apparently didn't sing his name after the last game at Highbury. Was he that blinkered that he didn't know we idolised him? Ashley Cole was one of us, after all. The thing I can never forgive is the way he chose to "celebrate" the immediate aftermath of winning the European Cup by once again turning on the Arsenal supporters - he couldn't just enjoy his success, but had to take it out on us. That sickened me and still does.
So, there will be no Cashley at Arsenal tomorrow, and there won't be ever again. It shouldn't, as I said above, take away from what he did for us. However, I reserve the right to have no liking for a man who disrespects us so badly as he has. It's a shame as Ashley Cole really should have gone on to be considered alongside the likes of Tony Adams and David O'Leary and George Armstrong - he would have probably beaten O'Leary's appearance record - but he chose another path and now is a footnote remembered for being part of the greatest side we've seen. Like a lot of other things in the last ten years, it just wasn't meant to be like that.
Posted by DvbrisG at Friday, September 02, 2016