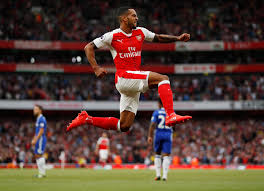 I want to finish off by offering credit where it is due, and that credit is to Theo Walcott. Again, there have been plenty of times in the past with Theo where we have thought he's finally getting there, only to see him slump or get injured again. However, since the first game of the season against Liverpool he has been superb as far as I'm concerned. The fact is that when Theo is playing well then Arsenal are playing well - his pace scares the life out of the opposition and it opens up space for everyone else once he is being targeted by their defenders. I gave Theo so much stick last season and I was convinced he would be on his way after May. Coming back this season he has already started to win over a crowd that was on his back whenever he did something not quite right. For all that I thought he was finished with us I still like Theo Walcott. I still want to see Theo show us all that he is as good as we had hoped he was going to be when he burst on the scene ten years ago. He is a likeable guy, clean-cut and no trace of arrogance. Maybe that has led to him being used as a bit of a door-mat by fans and England bosses alike over the years. For Arsene Wenger he has clearly always had something about him. If this is Theo's season then I can't wait to sit in the stands and watch it.
Posted by DvbrisG at Tuesday, September 27, 2016