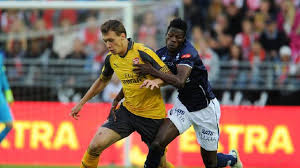 So after a competitive first-half in Norway, the second-half became a seven goal Arsenal stroll against Viking Stavanger. Theo Walcott finally got his first goal of the pre-season with a nice finish but the rest of his performance was mostly awful again. One moment just before half-time sadly summed him up over the last year or so, put through on goal by Santi Cazorla he lacked the confidence to go on and score, only to whack the ball out of play with an attempted pass to Alex Oxlade-Chamberlain. This week has seen Theo finally decide he ought to play on the wing, only for Wenger to suddenly say he sees him as a striker! I think we have all wanted Theo to succeed at Arsenal, perhaps moreso than any other player in the past ten years, but the fans have turned on him now and I don't see how he gets out of this malaise without leaving the club. I still fear that he will go elsewhere and do what we always wanted him to for us, but he's been here over ten years and is now 27. Theo has had his time and he hasn't delivered. Without the support of the fans, and a faith from Arsene Wenger that has actually probably never really existed, there is no future with Arsenal.
Joel Campbell and Santi Cazorla were the most eye-catching attacking players in the first-half last night, despite Santi seeing his penalty saved in the first couple of minutes. However, it was at the back that things were interesting before half-time. David Ospina looked ropey to say the least as the Norwegians put high balls in from set-pieces, but he was brilliantly protected by the ever more impressive Krystian Bielik. The young Pole has been converted from defensive-midfield to centre-back over the last year and he was outstanding again last night. He was strong, quick, always in the right position and, most importantly, dominant in the air. Okay the opposition wasn't exactly Ibrahimovic, Aguero or Kane, for example, but you can only play against the team you're facing. The lad did himself no end of good last night and Wenger really should be taking notice of how both Bielik and Holding have been far more impressive than Chambers and Gabriel - the Brazillian was a liability on his return to action last night.
The second-half, if you haven't seen it, was very much a training exercise. Stavanger have a league game tomorrow so made wholesale changes at half-time. Arsenal punished them heavily with goals for Campbell (who had scored the opener in the first-half), Cazorla, Walcott, Iwobi (2), Akpom and an own-goal. It should have been even more than that with the usual profligacy being prevalent at times. Nevertheless it can't be a bad thing to go and score goals for fun and it was a nice change to see an Arsenal team not deciding to stop going forward at 3 or 4 goals ahead.
The test tomorrow will be a step up in class from everything we've seen in pre-season so far when we play Manchester City in Sweden. The result shouldn't have too much read in to it either way - we beat City 3-0 in pre-season a few years ago, and then again in the Charity Shield in 2014 - neither scoreline meant a thing when the Premier League got going. The match is live on ITV tomorrow evening.

So despite a massive 8-0 win last night I was angry when I woke up this morning and saw Wenger's latest lies and nonsense about transfers. One of his criteria before spending money is the "resale value" of any major signing. This is why our recruitment of players is fatally flawed. Basically Wenger only wants players whom he can make a profit (or at least not a serious loss) on or he simply will not shell out the money to buy them. I couldn't care less how much a player is worth in four years time. What I care about is signing players that will win us the Premier League. If they do that then it doesn't much matter what you get if and when they leave. Those top players will make your money for you, if that's what your primary objective appears to be, by winning you the major trophies. He then went on to say that if an opportunity comes up to sign the right player Arsenal will take it. This is the kind of pot-luck that gave them the opportunity to sign Ozil, with Real Madrid needing to fund their Gareth Bale transfer. Without Bale leaving Spurs we would not have made a major signing that summer. Ozil fell in to Wenger's lap and certainly had not been pursued as a target. With one week to go before the season starts we sit exactly where we did back in May. Is it any wonder so many supporters are angry?
Posted by DvbrisG at Saturday, August 06, 2016