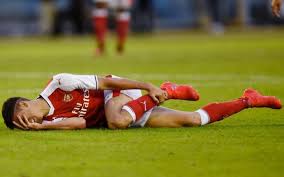 Anyone got Tony Adams' phone number?

The injury to Gabriel is the sort of thing that Arsenal seem to attract. For all that there are issues (and there are, simple as that) with our medical team you really have to say that Arsenal have no luck with injuries. We don't get the "knock" that keeps someone out for a week or two. We get the serious long-term injury that leaves players needing surgery and/or lengthy rehabilitation. However, it doesn't change the fact that we needed a quality, experienced centre-back even before Mertesacker and Gabriel were banjaxed. That Per got injured two weeks ago and we still haven't even seemingly made an offer for a replacement smacks of the total indifference towards transfers for which Arsene Wenger is becoming known. By playing with fire as he has it should really come as no surprise that Gabriel or Koscielny would get a bad one too. We might now see Koscielny (who is likely to be the next Captain I think - another wrong decision) rushed back following his summer break, and anyone who noticed the heavy strapping he had on his leg towards the end of Euro 2016 will know that he wasn't 100% then either.
The game last night had actually seen Gabriel looking like Stepanovs yet again. He was missing for the first goal, and then just ran away and left Iheanacho (I have no idea if that's spelled right) for no apparent reason for the second - watch the replay and see what Gabriel does. Where is he going?! It's actually the exact same thing he did for Rashford's header at Old Trafford last season so he is clearly not learning from his mistakes. I said the other night that I wouldn't have had him starting but the fact is that, until he got injured yesterday, he most certainly was going to play against Liverpool this Sunday.
The first-half against Man City was so depressingly familiar. Arsenal missed four clear-cut chances to take the lead before City scored with their first shot on target. You couldn't have made it up. When Oxlade-Chamberlain scored with that chip against Lens the other week I said to a couple of people that I didn't like it - you won't score them as often as you miss them. So it proved last night when Xhaka won the ball in midfield and played a perfect pass to put Ox in on goal. I don't ever want to see him trying that ridiculous show-boat finish again. Coquelin failed to beat a defender with the goalkeeper nowhere near his goal, Oxlade-Chamberlain (again) smashed the ball wildly wide with a totally open goal to pass it in to, while Aaron Ramsey tried to be clever with a free-header rather than just nodding the ball down and past Caballero. Anyone who was surprised when Aguero tapped in at the other end obviously hasn't seen Arsenal play in recent years.
In the second-half Arsenal were far more clinical, and took advantage of Joe Hart and his ever more apparent weaknesses. Theo Walcott came on and was outstanding playing from the right wing. He was taking on defenders, using the ball well, hitting good shots at goal, and generally looking a different player to what we'd seen up to now in pre-season. He set up Alex Iwobi for the equaliser, and Alex once again exposed Hart's problem when going low to his left with a well placed shot inside the post. Arsenal went on to dominate with Theo combining brilliantly with Alexis for the goal of the game. Good skill from Walcott, an intelligent one-two with the Chilean, and a beautiful first-time dink over the on-rushing Hart - a truly glorious goal. The third was a tap-in for Chuba Akpom after another Hart mistake under pressure from Santi Cazorla and, actually, Arsenal more than deserved it on the night. Akpom has four goals in four games, all from simple finishes, but being in the right place at the right time is not luck - Akpom seems to be a poacher and he could do no more than score the goals he has done in the hope of getting an opportunity at Arsenal this season.
So the pre-season games are finished but Arsenal seem to have so much work to do with a few days to the start of the Premier League. I can't begin to explain why Wenger seemingly insists on making life so difficult for himself and for Arsenal. He bid for Jamie Vardy in May yet, deep in to August, we still have no new centre-forward. The only defensive addition has been a youngster from the lower divisions. Money has been spent on a strong midfield player and hopefully Xhaka will prove to be a really top player for us. I just don't understand how we can be going in to the new season and still lacking the players we all know are needed. Worse than that we all knew we needed them this time last year. And probably the year before that too. It's madness.