Two good days in a row for Arsenal fans 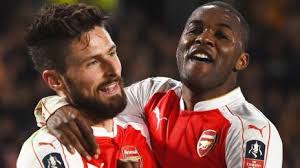 The best player on the pitch...and Olivier Giroud

Safely through to the quarter-final of the FA Cup, followed by the announcement that Arsenal will be selling all away match tickets for our fans at £26 from next season. What a time to be alive. It's not often the Club does something that is right for the supporters but this is certainly one of them. Home ticket prices are frozen, of course, but the next thing should be for those prices to be reduced in order to help fans further. One step at a time and all that. For now Arsenal should be lauded for what they have done. The change of heart, having previously opposed a £30 limit, to go even further than the new price-cap is unusual but creditable. This may well lead to a way in which away match credits are generated, but that is for the future. For those who go to a lot of away games things just got one hell of a lot cheaper - it will be a price-drop of more than 50% on games at Chelsea and West Ham, for example. No more £50+ for the likes of Norwich, or exorbitant prices for restricted views at Crystal Palace and Liverpool. It can only be a good thing so well played Arsenal.

The game last night was won comfortably 4-0 but the performance was tedious for the first 70 minutes. We were going through the motions again, sideways and backwards passing, slow and slower build-up. It's difficult to tell on TV but I suspect the movement up front was as non-existent as it has been in most of the recent games - what a difference Danny Welbeck makes when he plays. When we went forward with pace near the end of the game we cut through an inferior team almost at will. Surprisingly enough it brought out the best in Theo Walcott, for example, who had been dire up to the point his cross fortunately found Giroud for the second goal - it's amazing what can happen when you actually try to find your centre-forward in a dangerous area, rather than passing it back to your full-back and starting all over again. The same thinking applied for the fourth goal - yes, Theo should probably have been crossing to Joel Campbell at the far-post, but the deflection in to the net was his prize for buying a ticket in the first place. All credit to him for that. Credit to him also for being a captain who chose to talk to the referee and put pressure on - would Giroud have got a second yellow for diving instead of a free-kick had Mertesacker still been there?
It was important for Giroud to get those couple of goals last night. There is no doubt about it he has been woeful of late. Maybe his heavily pregnant wife was a distraction - we don't know how off the field problems can affect even the millionaire footballers - but his only performance worthy of an Arsenal centre-forward since Christmas was in the Leicester game. When the chances came last night he made no mistake. I know the first was a gift but you have to be in there to take advantage, while the second was a superb finish on his weaker foot. If he could get on one of his runs of goals then all is not yet lost this season.
There were a few players I was impressed with last night. Ospina again did all that was asked of him, while Calum Chambers dominated the penalty area once he moved to centre-back. Kieran Gibbs has also given the Manager a choice to make with his contributions in the last couple of games, but Monreal is also capable of playing well in the middle as he did last night. The other player to come out with genuine credit from last night, for me, was Joel Campbell. He wasn't as impressive as against Swansea but the injuries meant Wenger wasn't able to take him off last night. He capped another good display with that superb pass for Theo's well taken first goal. It was an unbelievable ball he played through the defence and this wasn't the first time. If Ozil had been the man picking that pass we'd have been hearing about it all week. Campbell should never have been left out in the first place, but he should surely be first-choice now. By the same token, whenever Ozil isn't there he should be the man filling in for him behind the striker. I really like Campbell and have done since I wrote a piece about him during the World Cup a couple of years ago.
There's been plenty said on social media about the fans who produced the "thanks for the memories" banner following the game. They've paid their money and they're entitled to their say. A 4-0 win at a second division side doesn't erase the memories or the effects of what has happened in recent weeks. Those who want the Manager to go are usually criticised for keeping quiet when the team wins, and now they are branded as idiots for sticking to their principles despite a victory. I have no problem with what they did. However, I do have a problem with one of the main protagonists with the banner, who is one of the regulars on Arsenal Fan TV, abusing Ian Wright on Twitter and expecting people to back him up. Indeed the individual concerned spent the night on a campaign of self-publicity on Twitter which maybe tells us his motivation for showing the banner has more to do with personal aggrandisement than it does with seeing Arsene Wenger move on.
We now move on to Watford on Sunday where Wenger will hopefully be prioritising the FA Cup over the forlorn hope that is a result in Barcelona next Wednesday.
Posted by DvbrisG at Wednesday, March 09, 2016