Lying Wenger is running out of friends 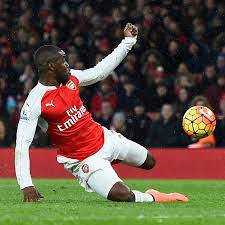 "Campbell hasn’t played for a while and he started to tire. He played against a very young left back and I thought Welbeck could give him some problems with his runs in behind. These kinds of decisions don’t mean that Campbell did badly. I think he did quite well tonight. I also think that there was room on that flank to be very dangerous."

Just about every bit of this direct quote is founded on a lie designed to defend the indefensible. It shows inexcusable disrespect for the supporters - he honestly believes we know nothing about football whatsoever. Let's take it from the start with the idea that Joel "hasn't played for while" - he played ten days earlier at home to Hull City in the FA Cup, and he was substituted then too! "He started to tire" - no, he didn't. Just a minute or so before he was taken off he had once again roasted the young kid at left-back. To say Joel was tired is a total untruth. "I thought Welbeck could give him some problems with his runs in behind" - Bellerin had been making those runs, beyond Campbell, all night so why make this change? Welbeck was then almost immediately shifted to the left before he'd even seen the ball come to the right - he was replaced by the totally ineffectual Theo Walcott who neither made runs in behind, nor took his man on as Campbell had. Bellerin, meanwhile, was no longer able to get beyond his winger as Waclott was constantly in his way as he tried to come forward. More lies. "I think he did quite well tonight. I also think there was room...to be dangerous" - by virtue of claiming there was room to be dangerous down that side he was totally ignoring the contribution that Campbell had made. Wenger is claiming that Joel Campbell hadn't done enough on the night. Was he actually watching the same game as the rest of us inside that stadium? When Joel went off our attacking threat almost totally disappeared. Wenger has lost the plot.
I'm sick of the lies. I'm sick of the disrespect. I'm sick of watching Arsenal throw away what should have been our Premier League Title (again). We all know where Arsenal are short in this squad, but the one man able to change that decided to sign only one outfield player in the last year - a player who doesn't get in the team and, from the little we've seen of him, is nowhere near being a top Premier League midfield player. It would be excusable if last night was a one-off. However, in the last three to four seasons this group of players (the core of this squad has hardly changed) have lost games like last night time and again. They've been humiliatingly thrashed at Old Trafford, Anfield, Stamford Bridge, Etihad etc. On Saturday there is every chance now that they will complete the set with a hammering at White Hart Lane. One man is to blame for this and he is now running out of support. The blind still want to place their faith in him, but more and more are seeing clearly what the problem is. The likes of Steve Bould should be ashamed for becoming the kind of "yes man" that allows this nonsense to happen while sitting there in silence week after week, game after game. We should be Champions-elect this season. Instead we are now looking over our shoulders at the teams behind us. It is a shameful situation and the saddest thing of all is that it isn't going to end any time soon.
I hate writing these words about Arsene Wenger. It is not meant to be this way. He created the best football team we've ever seen. He then destroyed it. He forced us to leave Highbury "to compete" and we are not competing. His legacy should have been to be remembered as Chapman and Whittaker are at Arsenal, Ferguson and Busby are at Man Utd, as Shankly and Paisley are at Liverpool, as Bill Nicholson is at Tottenham. Instead his legacy will be to be remembered as a man who destroyed it all by his own actions. Time will heal the wounds when he eventually goes, as it has for George Graham over the years. In George's case, however, we had a board who knew when to call time. Arsene will simply be allowed to keep going as long as he wants to all the time he's delivering a good balance sheet. Every bad result simply lengthens the time it will take for him to be remembered with the fondness that he should have always had in his favour.
Posted by DvbrisG at Thursday, March 03, 2016