When the performance doesn't matter 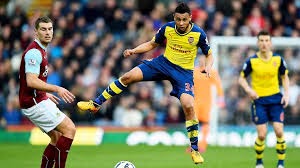 
At this stage of the season, with an outside chance of threatening Chelsea, the only important thing is the result. We are effectively playing a cup-tie every game from here on and the only thing Arsenal's players need to concern themselves with is progressing to the next round. At the same time, the more points we put on the board, the more quickly we can secure our place in the European Cup again for next season. This Arsenal team is on a great run and long may it continue.
The fact is that we played badly yesterday. For me it was as bad as we were in many games prior to Christmas. After a bright first ten minutes or so we went in to our shells, stopped playing the high pressing game, and got annoyingly slow in our build up. You know we're playing badly when Mertesacker is the man who sees more of the ball at his feet than anyone else. I can't even begin to understand what goes through the mind of an attacking and creative midfield player who wants to play passes back to his centre-half at every opportunity. However, thanks to that quick start we got the goal that won the game. Coquelin broke up a Burnley move around the halfway line and sprung us forward. Yes it ended up with a scrappy goal (though a fine finish from Aaron Ramsey) but it was the closing down of inferior opponents near their own defensive third that created the opportunity.
The players who impressed yesterday were few and far between. Following an early moment when Mertesacker's lack of speed was exposed I thought he had one of his best games of the season. For once he was aerially dominant and his reading of the play was at its best. I also thought Koscielny played well. His passing out from the back was poor, but at least he was attempting a forward pass which was more than could be said of certain star players. Nacho Monreal continued his superb form and was excellent on our left - before the game Sky highlighted how almost half of Burnley's attacking play comes down that side of the pitch but Nacho snuffed out everything that came his way. Ahead of the defence there wasn't much of note apart from the continually imperious Francis Coquelin. Since coming in to the side he has provided the balance and discipline in the defensive side of Arsenal's game that has been missing for so long. He makes tackles, covers well, and uses the ball sensibly. Coquelin seems to have understood his limitations with the ball at his feet and doesn't tend to try and be clever at any time. He also stays away from chasing through to the edge of the opposition box - that isn't his role and he knows that, which is something that sets him apart from Mathieu Flamini, for example. I also want to say a word in favour of David Ospina who did well yesterday - there seems no way back for Szczesny any time soon as long as the Colombian keeps playing well.
I admit that I was getting increasingly frustrated as the game went on yesterday. I know Burnley have had some good results of late, and have a very decent home record against the top sides. However, the first ten minutes showed that they couldn't live with our players when we played the game in the right way. By going deep in to the game at just 1-0 we were only one slip, or a Mike Dean decision, away from giving up the win. The square and backwards passing when we had the ball was excruciating to watch at times. Giroud seemed to be in one of his funny moods yesterday where he showed a lack of interest in the battling side of the game, and it was a breath of fresh air when Danny Welbeck came on and provided the pace that would finally stretch the Burnley defenders. In fact, once Welbeck came on we were never really pressured at all, except for when Ramsey got the ball and twice gave it away by trying to play like Messi within thirty yards of his own penalty area.
For all that I didn't enjoy our display, and how it must have been a truly awful game for any neutral watching on TV, I can be more than happy with the 1-0 win. If results go our way this afternoon then we can sit three points clear in second, and could potentially go in to our game with Chelsea within five or six points of them, with the games in hand wiped out. That really would make it interesting should we win against them. At the moment it's a distant dream, but the light is not yet extinguished. One other thing to note, assuming what I read earlier is correct - Fabregas and Matic are both one booking away from a two game ban. Imagine Chelsea having to play Man Utd and Arsenal without those two and Diego Costa...
Posted by DvbrisG at Sunday, April 12, 2015