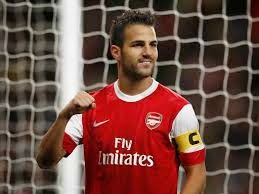 
I have little malice towards Cesc Fabregas. To me he is one of the finest footballers I've ever seen in an Arsenal shirt. If I was picking my greatest team of Arsenal players that I've been privileged enough to watch then it is a very close call between him and Emmanuel Petit to partner Vieira in midfield. Cesc was a prodigy, a player I knew was destined for the very top from the night I watched him make his Arsenal debut in the League Cup. Very few players exist who can pick a pass the way he can. For me, with his willingness to do the less glamorous side of the job too, he is a better player than Mesut Ozil. I couldn't be too upset at him when he left for Barcelona. We all knew it would happen one day, though the way he forced his transfer left a bitter taste. That Arsenal got so little money for him was down to Wenger and the other senior Arsenal figures that accepted such a low transfer fee for a player of his ability. I also knew that if he ever left Barcelona again then he would end up back in Arsenal's midfield - we had first refusal and surely only an idiot would turn down the chance to sign Cesc Fabregas. When he didn't end up at Arsenal after all then Arsene Wenger became that idiot. I couldn't blame Fabregas when it was clear Arsenal had decided against buying him back on the cheap. I was angry that he decided to go to a Mourinho managed Chelsea, or any other English club, given the way he had always talked about Arsenal after he had left us. At the same time there was a part of me that couldn't blame him even for that, simply because Arsene had snubbed him. Until recently I held Arsene Wenger entirely responsible for the fact that Cesc was winning Chelsea the Premier League (forget Eden Hazard - he's not Cesc's, nor Alexis', class).
So what has changed my opinion on laying the blame at Arsene Wenger's door? The reason has actually been with me since the away game at Crystal Palace when my Dad got talking to some fairly well connected friends in the away end. Now is the time to share it. I should say at this point that these people are not "in the know" types, but I would trust what they say given the people whom they know within the Club itself. I don't have "sources" and I don't do gossip. I don't say that this is the real reason why Cesc is not an Arsenal player right now, but it is the most plausible explanation I have yet heard as to why Arsene turned him down last year.
Most people will know that Cesc Fabregas is represented by Darren Dein, the son of the man who for many is the missing piece at Arsenal - David Dein. Regular readers will know what I think about David Dein and not a lot of it is favourable. Darren Dein, a supposed Arsenal fan from the ultimate family of Arsenal fans, has represented a number of Arsenal players in recent years. Each of these individuals have one thing in common - they all exploited Arsenal to gain a transfer elsewhere. Each of them was considered a vital player at that time. Cesc Fabregas, Thierry Henry, Alex Song, Robin Van Persie, the list goes on. Now Arsene is well known to be a great friend of David Dein. However, he is perhaps not quite so comfortable in the company of Darren Dein. The story goes that Cesc, on being told that Barcelona were selling him, came cap in hand to Arsenal and Arsene Wenger. At this point Arsene said that yes, he would have him back, under one condition - he must ditch Darren Dein as his agent. Arsene has become fed-up of Dein and the way he has stabbed Wenger in the back with his most high profile players. I'm not aware of any current Arsenal player represented by Dein (though I'm sure someone will point out that I am wrong). When presented with this ultimatum Cesc Fabregas decided he loved Darren Dein a little bit more than he loved Arsenal. He refused to cut his ties with Dein. Arsene Wenger, rightly in my opinion, stuck to his guns and turned down the chance to sign Fabregas. To spite Arsene and Arsenal he decided, with Dein's help, to join Chelsea instead.
As I said above, I don't say that this story is true, but I trust the people who told it. Moreover, it is a credible reason as to why he will be wearing blue on Sunday and not red shirts with white sleeves. It will be awful seeing him at Arsenal and playing for that lot, but the disruption Dein has caused over the years was something Arsene Wenger didn't want returning to his Arsenal dressing room and I think, over all, that has to have been the right decision.
Posted by DvbrisG at Friday, April 24, 2015