It's been far too long - let's return with some Jack 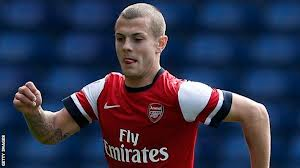 Wilshere - THE star of this Arsenal team


I haven't written a blog post since 2nd January. There are a couple of reasons as to why that's the case but, whatever they are, that is far too long. I will admit that I have struggled for the inspiration to write anything. I suppose that's fairly obvious otherwise I would have been posting.
One of the things I was entirely conscious of was that I don't want to keep repeating myself. Regular readers (if you're still there) will know I am very much of the opinion that Arsene Wenger should go. However, if you keep on banging that drum after every defeat or poor performance people very quickly become fed up (incidentally I couldn't believe people were going mad after last Sunday's defeat - if you hammer the Manager for what happened in that game then you lose credibility). Basically there are only so many times I can say or write the same thing before even I get bored with it.
The very basis of this site is that it is the opinion of one man - me. I have always made a lot of the fact that I go to games. I have a season ticket and I believe (rightly or wrongly - it's my opinion) that my views have more credence than those of someone who doesn't attend. Well the fact is that I haven't been to see Arsenal play since before Christmas. Due to family, health and work reasons I have not been able to get to a game. Given what I said above about being an attendee, I would feel like an utter charlatan if I sat here spouting off when I haven't been doing the one thing that I say gives me a better angle than a number of other bloggers (I do find it interesting that a number of the more prominent Arsenal blogs are written by people who see 99% of their Arsenal action on a TV screen). The fact is that, having not been at games for a month it would not be right for me to come on here and pretend to speak with any authority on what I've seen on Sky. I still Tweet about it all the time (@ARSENALDvbrisG) but that's a lot different to writing an "essay" piece on here.
The final reason I've not been writing is that, apart from the matches, nothing has been happening at Arsenal. I have a policy of ignoring transfer gossip on here. Arsenal's inaction in that department would have meant that gossip would have been all there was to talk about. In fairness the press has even given up making up stories where Arsenal are concerned. We all know that signings are needed, and where on the pitch we are weaker. I was annoyed to hear Wenger say that the Club needed to concentrate on signing up Theo Walcott before looking outside. Why? Are they incapable of working on more than one player at a time? Now that Theo has done the deal you would expect, logically, that a couple of players will be arriving. But this is Arsenal so I will not be holding my breath.

I've posted a picture of Jack Wilshere at the top of this piece. Over the last few weeks Jack has shown the sort of form we were getting before his injury. There were times before Christmas where he was not playing very well, though he would always be trying. The game at Bradford was a case in point and it also illustrated my point about being there. Talking to people who watched that game on television they all told me how Wilshere had been the only player worth any credit as he was outstanding. Indeed, one of those prominent internet fans I referred to earlier, told me on Twitter I was talking "complete b******s" for criticising Jack's work on the ball that evening. The fact was that I was on the coach outside Valley Parade having watched the game, while this individual was in his living room listening to Sky's commentary team.
Over this past few weeks Jack has really found his feet. His all-action displays have seen him get back to his very best with the ball too. I can't believe there is a more fouled player in the Premier League than Wilshere, yet so few players are punished for the way they kick him. Somehow Gareth Barry stayed on the field (again) last Sunday despite his continued assaults against Wilshere. Jack just gets up and gets on with trying to destroy the opposition. Of course, the minute he makes a challenge himself you find the muppet referee can't wait to book him. It is a mark of Wilshere that he is strong enough, and tough enough, to take the physical side of the game, especially following his long injury lay-off.
Wilshere has become, without a doubt, the best player in this side. He is the fans favourite, marrying supreme effort with sublime skill. I saw a lot of Wilshere when he was coming through the ranks, thanks to the now defunct Arsenal TV channel. A feature of his game then was his goalscoring from midfield. He wasn't afraid to shoot from any angle. There are times now when he is reluctant to do so, no doubt under instruction from Arsene Wenger to pass the ball first and foremost. His goal on Wednesday showed that he still has that eye for goal. It also showed that he can shoot as well as anybody. I honestly believe that Jack Wilshere is Arsenal's version of Steven Gerrard. He has the talent to be even better than Gerrard. He should be the Arsenal Captain right now as he is the true "leader" in this group. I just hope he spends his career at Arsenal, as Gerrard has at Liverpool, but that he gets a few Premier League Titles (unlike Gerrard).
Posted by DvbrisG at Saturday, January 19, 2013