Frimpong gets another bad one, Afobe to replace Park? 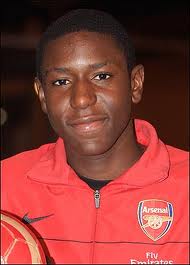 Afobe - some rare good news on the injury front


It's been a day of very mixed news for two of Arsenal's brightest young prospects, Emmanuel Frimpong and Benik Afobe.
Frimpong has suffered his second cruciate ligament injury in less than two years. As rotten luck goes this is about as bad as it can get for a young man trying to make his mark. Frimpong had a very decent first half to this season as a squad player at Arsenal and was tearing it up at Wolves until Saturday, when his loan spell was brought to a very painful halt. Frimpong has quickly established himself as a bit of a cult figure with the Gooner faithful since his debut against Liverpool. What he may lack in "technical" ability he more than makes up for in sheer effort, strength and determination. With time, and good coaching, his ball-skills can be improved - just look at Alex Song - and he and Coquelin were battling it out to be the understudy in central midfield. Frimpong isn't everyone's cup of tea, however, and it is often remarked that he lacks self-discipline on the park. Again, I would argue that his youthful exuberance will soon give way to a learned experience. That, ultimately, was the purpose of his loan at Wolves. Having already been set back a year by his knee injury on the eve of last season you have to feel extremely sorry for him. If there is a small bit of good news for Frimpong it is that this injury is not in the same knee. You would have to think that gives him a good chance to recover. He will be out for most of the rest of the year.
The flip-side to Frimpong's injury is the return to full training (with the first-team, which I believe is telling) of Benik Afobe. The young centre-forward impressed on his first-team bow against New York Red Bulls in pre-season, but was promptly struck down with a serious hip injury. Since then the only sight we Arsenal fans have had of him has been sitting with Jack Wilshere at home games. Afobe had a highly successful spell at Huddersfield last season and could have been expected to go out to a Championship, or maybe even a Premier League, side this season. Personally I think he was in the thoughts of Arsene Wenger as a back-up to Van Persie and Chamakh. I wonder if, had Afobe not got injured, Ju Young Park might have actually been getting paid to play some football in Lille, rather than watching Arsenal from the bench. It is likely now, if he gets fit enough to play, that Benik will be loaned out for the rest of the season. However, I just wonder if, with Henry going back to America and Park being totally ignored by Wenger, the youngster may find himself promoted between now and May. His injury seems to have a lot of similarities with that which effectively ended Freddie Ljugberg's career at Arsenal, so I hope that he can recover somewhat better than our prolific Swede. Afobe is a goalscorer, and Arsenal will certainly need one before the season is out - a Kevin Campbell style impact would be very welcome indeed.
Posted by DvbrisG at Monday, February 06, 2012