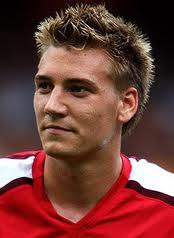 Nicklas Bendtner - not as I had expected him to be


I'm writing this from my sick-bed. This time yesterday I was in good health. Today I have been downed by the dreaded man-flu. It really is unpleasant and it means I'll be keeping this a little more brief than I had intended. I was going to write about our surprise transfer business of yesterday, but it will have to wait.
Rather randomly I bumped in to Nicklas Bendtner last night. It seems that Nick had been given a bit of time off by Sunderland following his broken nose and he chose to take a short break in Dubai. Who says footballers have a tough job? I have to say that Bendtner was completely the opposite sort of character to that I had expected. I thought he would be arrogant and aloof, dismissive of the public. After all, this is how the popular press have chosen to portray him over the years. Instead I was greeted with a smile and, after confirming that his face was on the mend (he still sports an impressive shiner on his left eye) I asked about his future. When asked if he was coming back to Arsenal he said "perhaps if everything changes around." I found this an interesting response and asked if he meant "with a new Manager?" Again he smiled, and then said "we will see." He then graciously signed an autograph for my son and went on his way. Not Pulitzer Prize winning stuff, I grant you, but it struck me that he was a player who has had his card marked by Arsene Wenger. He won't be coming back all the while Arsene is in charge. Most supporters will not be too disappointed. Those who have read this site for a long time will know that I always defended Bendtner. I felt he was underrated, and I was certain he would be a success at Sunderland. His comments about Arsenal earlier in the season, where he said he would not ever go back, made me annoyed and I realised that my defence of the Big Dane had been misplaced. He has, of course, not been a revelation at Sunderland. I was wrong about Bendtner as a player, but I am pleased I got the opportunity to meet the man and realise that the real Bendtner is not the man he is portrayed as. I would have liked to have more time to speak to him, but that's the way of it. It's just nice to get a small chat with anyone connected with Arsenal Football Club.

The results last night mean that fourth place is looking even more distant. A failure to win at Bolton this evening would see it starting to disappear over the horizon. The team news is good, with Sagna possibly getting a start, and plenty of others returning to fitness. I think Arteta will return to the starting eleven tonight, though Tomas Rosicky and Aaron Ramsey were both outstanding on Sunday. I wouldn't be surprised to see Arshavin start in place of Oxlade-Chamberlain - today's news on Jack Wilshere will give Arsene Wenger food for thought over the playing time he gives to the young man (the timing of the news of Wilshere's "setback" does not surprise me - there was no way Arsenal would let it leak out while the transfer window was open).
Arsene said yesterday how it was a tough game on Sunday and he would have to assess certain players. I think he may have been preparing the way to rest Robin Van Persie and start with Thierry Henry. Personally I would rather see RVP start (and Henry could then be the one to play ahead of Chamberlain) and try to get the job done. The last thing Arsenal need tonight is to be chasing the game again.
Bolton have their own problems, but confidence should be good after they stuffed Liverpool in their last game. Ryo can not play for them against Arsenal, which is no bad thing for us. It would come as no surprise to me if a certain Kevin Davies was back in their side tonight though. Never  underestimate the value of his loose elbows and ability to con referees in to awarding free-kicks.

That will do for now. More tomorrow. Hoping to feel better by then.
Posted by DvbrisG at Wednesday, February 01, 2012