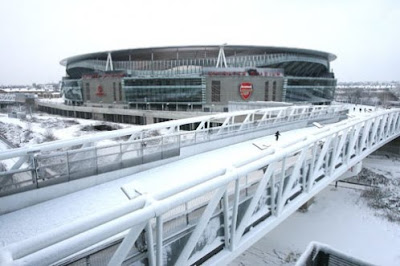 I had a bit of a result today. With the weather forecast being as it was we decided that we'd take the train to the match. While stopped at Ashford Station we got a message from Arsenal that the game had been postponed, so we all managed to get off the train without having to go on to Ebbsfleet, or even St Pancras. It was doubly a good result as the train had just taken twenty-odd drunken twats dressed as Father Christmas. I don't know if it happens to fans of other teams but why is it, when you have an Arsenal shirt on, people feel the need to gob-off in some way? The annoying types in the red suits had already started so I wasn't disappointed to depart the train as I suspect it would have become tiresome by the time we'd reached North London. My day got slightly less fun when I had to walk the last mile-and-a-half home, which is all up hill, as the buses couldn't get out of Dover. As a result I have very sore legs, and a very wet hat and coat as it was blizzarding all the bloody time.
In truth I wasn't upset that the game was called off today. I don't think we'd have really enjoyed sitting there for two hours in the freezing cold unless Arsenal really turned it on and destroyed Stoke. The chances of that happening with our home record were pretty unlikely. As a result of the postponement we now have a decent break between fixtures. Unfortunately the next game is against Chelsea. The time for previewing that is a long way off, but I will say early on that it is a must-win game for Arsenal, for a plethora of reasons.

The Champions League draw has pitted us against Barcelona once again. Can you really see us beating them over two legs? The fact that we have come up against them is entirely our own fault. After three wins at the start of the group stage Wenger clearly felt it was job done. The players then sat back in Donetsk after going a goal ahead and two defeats meant we weren't going to win the group. Instead of drawing AS Roma, as Donetsk did, we've come up against we have to play the best team in Europe and the best player in the World. Again. I suppose that, by drawing Barcelona, we at least know we'll have plenty of spare midweeks to fit in the game that was called off today.

Arsenal have also announced today that Ryo Miyaichi will be joining the Club in January. Regular readers will remember the Japanese being on trial with us in the Summer. He played a couple of Reserve fixtures alongside Wellington Silva, before going to a trial at Ajax where he broke his leg. At the time it was thought that the break was an "Eduardo" type problem, but apparently is wasn't as bad as feared. Miyayichi apparently has the look of a young Cristiano Ronaldo with the ball at his feet, and his Youtube videos show a quick and skilful attacker. He's only 18 so is yet another "one for the future" but I wish him well and hope he can make an impact at Arsenal. With Wellington apparently being used by FIFA to get at the English FA with their refusal to put him forward for a special talent visa, Miyaichi might be the only arrival we have in January.

I hope to post again on Monday, but I think it's going to be a fairly quiet week Arsenal-wise as we head towards Christmas. I might try and assess the season so far at some point in the week if things do remain on the slow side.
Posted by DvbrisG at Saturday, December 18, 2010