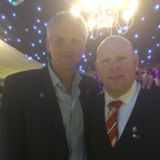 I never realised quite how tall John Lukic is. He is officially listed as 6'4" but let me tell you that is a conservative measurement of his height. It is no wonder that he saved so many penalties. I can't imagine anyone standing 12 yards from his goal and being totally confident they were going to find the net. Having met John on Saturday night I can also tell you he is a damn nice bloke too. More than that, he is a proper Arsenal Man and loves the club the way the fans do.
This was the twelfth annual Dover Gooners Legends Dinner and John Lukic was our guest on this occasion. Once again we were raising money for Bob Wilson's Willow Foundation and it was a pleasure for our supporters club to hand over a cheque for £1500 raised by the members via our raffle. Arsenal once again provided a shirt, signed by the first-team squad, and this was won by one of our special Italian supporters from Gunners Bergamo, once again re-iterating the strength of our relationship with those great Arsenal fans in Atalanta.
The original intention was, as in previous recent years, that I would interview John in front of the assembled crowd. However, John Lukic is what you might call a "proper" after-dinner speaker so there was no need for me to be prompting answers to my usual inane questions. Instead of hearing too much of my voice the guests listened intently as Lukey took us through his career from a youngster at Leeds, on to Arsenal, back to Leeds, and finishing once again at Arsenal. Big John is a master of his craft and his speech is clearly well rehearsed. He has some excellent punch-lines on the end of his stories, true or otherwise.
Among the highlights of the speech was, of course, Anfield 89. John talked to us at length about the game that night, confirming once again the way George Graham set out his team-talk before the game and how he had virtually scripted the match down to the late winner. Being the goalkeeper he was able to give us a unique insight in to the events of the game and how he couldn't really celebrate Alan Smith's opening goal as he was in front of the Kop. More than that he went on to tell us that his reaction was one of "what have we done"? Basically, at 0-0 there was no pressure as Arsenal were there to be the sacrificial lamb for Liverpool. At 1-0 up it was a bit different. There were a few in the room who were there at Anfield (not me) and John talked about the atmosphere inside that stadium. Basically it was a wall of noise, and the closer it got to the end the noisier it got. That was until Micky Thomas got the winner and he said it was like somebody had hit the mute button all around him. All that could be heard was the few thousand Arsenal fans in the far corner going utterly mental. It must have really been something to be in the ground. He also made a well known gag about how his throwing the ball out to Lee Dixon, rather than booting it long himself, was the beginning of the expansive passing game that Arsene Wenger went on to "inherit" after Lukey had started things off at Anfield. The way John puts the story across is funny to say the least.
We heard how he never got on with George Graham from the day the new boss arrived. The story of how David Seaman was signed is something that maybe only John can tell so I won't impart it here. Suffice to say that it illustrated to everyone in the room how football worked in that era. It was a shady business and it probably still is among certain bosses, especially the British ones.
Back at Leeds he won the Title of course, and he told us how he wasn't best friends with Eric Cantona. However, he admired Cantona as a brilliant footballer and, particularly, a great professional who was always working hard in training. The parallel with Dennis Bergkamp is an obvious one in that regard and Lukey had told the room early in his speech that Dennis is the best player he had played with. In terms of the guests we've had at Dover each one has named Bergkamp as the greatest. But then I already knew that.
The speech finished with how he came to retire. You might recall that he played a few games out of the blue in 2000 as third choice goalkeeper. The first of them was at Lazio in the Champions League and John said that he knew that night it was time for him to bow out. The pace was quicker, the ball was faster, the technique a higher quality. At that point, aged nearly 40, he knew it was time to go quietly. We also heard him praise David Seaman as the best goalkeeper he had seen when it came to "picking up" the ball early - given the nature of some high profile goals he conceded that is maybe a surprise! (I'm jesting, obviously). There were kind words about David Rocastle and the game at White Hart Lane in 1987, and also a very balanced answer given when an audience member unnecessarily asked him about Arsene Wenger and his future. John Lukic is a fine man and a great speaker. Above all, at the very end of his speech, he spoke about the pride he has in having played for "this great club" and it is clear that he absolutely loves The Arsenal.
It was a great night and we are grateful to John Lukic for being our guest, and to the members and friends of the Dover Gooners for once again turning out in support of the event. I'm looking forward to next year already.
Posted by DvbrisG at Wednesday, November 16, 2016