Not a bad point 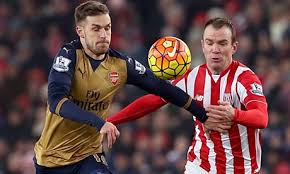 I don't want to make this post all about the abuse that Aaron Ramsey suffers every time we play Stoke City. It's being covered in a big way just about everywhere else after Arsene Wenger, when asked about it, answered with a somewhat more reserved answer than perhaps the situation deserves. Regular readers know that Rambo isn't my favourite Arsenal player by quite some distance. However, he is an Arsenal player and he is getting some of the most vile stick from a bunch of total neanderthal f***wits and taking it all with class to spare. I was pleased to see the likes of Matthew Le Tissier and Ian Wright expressing their disgust yesterday as it puts the issue on the agenda properly.
What exactly has Ramsey done wrong? Refused to shake the hand of a man who, at the time, seemed like he might have ended an incredibly promising career? What a crook he is, that Welsh charlatan! You only have to read through the sad, pitiful bile that was directed towards me in the comments section on Saturday to see what kind of people they are. I particularly enjoy being abused by someone questioning my education, but who can't tell the difference between "your" and you're". Or there are the clowns that accused me of being an armchair fan because they can't read well enough to see the bit that tells them I'm an Arsenal season ticket holder. I don't doubt there will be more here this evening, spewing their guts over Aaron Ramsey while spitting uncontrollably at the screens on their computers. The best thing I saw yesterday was a cracking Tweet from @DaleyAFC which said this:

"Do Stoke fans stand outside hospitals and boo the ambulances as they bring people in?"

Let's face it, that's effectively what they are doing when they direct their horrible abuse towards Aaron Ramsey. Oh, and by the way, the bloke from the Football Supporters Federation on Sky Sports News today who wants to condone it on the grounds of self-expression and free-speech needs to be removed from his position.

I hadn't intended to waste so long on that, so let's get on with what happened in the game.

I wasn't disappointed with the point yesterday. I thought it was a solid display and we were pretty strong across midfield. The defence did okay, the goalkeeper did brilliantly, and we missed three very presentable chances. It's still what happened on Wednesday night in injury-time that is irking me.
I've seen Alex Oxlade-Chamberlain getting plenty of stick since the game but I can't agree with a lot of the criticism. Maybe it's fashionable to get at him right now. Yes, The Ox gave possession away with some poor passing at times, but he wasn't alone - Ramsey, Koscielny, Flamini, Bellerin and Walcott were all equally at fault, and some of them (Theo) far worse than Chamberlain. I liked the hard work from him yesterday in the centre of midfield and the fact that he was able to hold the ball in tight areas and win it back when he had to. No pelters for The Ox from me.
Olivier Giroud had two good chances. The second one was a magnificent save from Butland, but the first one was a bad miss as far as I'm concerned. When you see the angle from behind the goal Butland had actually got himself in the wrong position and left the whole of the far side of the net open. If Giroud had done what we're told strikers should do and put the ball across the goalkeeper he would have scored. Instead of that he hit it to the near-post and Butland was there to keep it out. Joel Campbell (one of our best players again yesterday) also had a great chance late on when he came in on his left foot, only to spoon it high and wide. I also have to give a word of praise to Alex Iwobi who I thought was excellent when he came on for the last 20 minutes.
At the other end we had Petr Cech to thank again for the clean sheet. Stoke weren't without their opportunities and, in the last minute, Cech made an incredible save with his outstretched left leg, just a second after Aaron Ramsey (take that you mugs!) had cleared off the line. It ensured a deserved point for The Arsenal in an always difficult game.
We might have had another avenue for the three points had the referee been doing his job properly instead of allowing himself to be intimidated by a raucous home crowd. There were two clear penalties for Arsenal in the second-half that he failed to give - Jamie Carragher was made to look the absolute mug that he is by Souness after the game. That's three in a week following the one Giroud didn't get after being flattened against Sunderland in the FA Cup. We also saw a succession of fouls go unpunished by the Stoke players - Pieters the worst offender with foul after foul, especially on Joel Campbell. It's hard enough at Stoke without having to play the officials at the same time (cue the "whingeing cockneys" in the comments).

Just to finish on a high note, check out the new Mesut Ozil chant that got its first airing yesterday. Apparently it's been nicked from West Ham but I really couldn't care less to be honest.