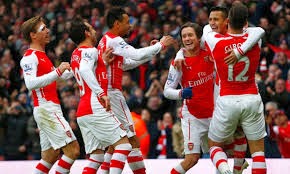 If you're an Arsenal fan and you're not happy with the performance against Stoke City then you need to get out more. I don't care if you're staunchly in the Wenger out camp, this was Arsenal playing their best football of the season and putting in a great team performance all across the pitch. The passing was quick, the movement superb, and we were excellent without the ball as almost all the other players finally followed the example of Alexis. It was as far removed from our performance away at Stoke a few weeks ago as it's possible to be. Following that game I tore in to Arsene Wenger for the mentality given to the players before kick-off, leading to the concession of a goal after twenty seconds. Today he clearly had the players right up for it and it was brilliant.
I couldn't go to the game again so I had to make do with Sky. It's always disappointing to miss a game when the players turn on the style. It was far and away our best performance of the season as far as I'm concerned, and probably the best all round team display since the FA Cup quarter-final against Everton. Even Per Mertesacker looked better today, though I do wish he'd show a bit more feistiness at times, as well as getting in the face of a referee who was willing to let Stoke get away with some terrible behaviour.
Mathieu Debuchy is likely to be out for a while again now with a dislocated shoulder. Once again an Arsenal player has been nobbled by a Stoke thug. Why did Arnautovic feel the need to shove him in the back with the ball, and Debuchy, already off the pitch? It seems that Stoke's players simply can't help themselves but to be violent when they play Arsenal. But then you only have to look at Mark Hughes sitting on the bench to see where they get it from. Remember his Blackburn side targeting the knee of Cesc Fabregas in the FA Cup semi-final of 2005? Quite incredibly Mr Moss dismissed the incident involving Debuchy and wasn't even calling for medical help until Mertesacker started waving frantically for it himself.
Peter Crouch was up next. He spent the whole game kicking and pushing at our BFG (who I really wanted to see give some back) but saved his best for the eye of Nacho Monreal. Isn't it amazing how many times Crouch accidentally catches someone in the face with the pointy part of his elbow? Again, Mr Moss didn't care. And he kept on not caring as foul after foul was made, but often not penalised with so much as a free-kick. I found myself lamenting the fact that this Arsenal team doesn't have a player or two who will decide, in those situations, that enough is enough and they're going to start fighting back. Today the players did that with the ball, but maybe the likes of Stoke might be less inclined to try and bully Arsenal if someone like Lauren was still about.
I'm running out of things to say about Alexis. He created Koscielny's goal, scored a magnificent Arsenal second, and then got the third with a little help from the otherwise excellent Begovic. That second goal was put together in the way that Wenger's teams used to hit opponents. Closing down, quick passing, movement off the ball and a great finish. The TV cameras kept cutting to Thierry Henry and Robert Pires in the crowd and it could easily have been themselves putting that move together down the Arsenal left. It was a beautiful goal from our best player. The only trouble is that it's only a matter of time before Man City or Real Madrid come in and offer outrageous money if he carries on in this way.
If there was a criticism today then it was that we didn't go on and humiliate Stoke following the third goal (incidentally Mr Moss showed just what little authority he has on the pitch with the wall for the free-kick - they wouldn't move back so he simply sprayed the grass around them, seven yards from the ball, rather than dealing with the issue). On the day it's a small criticism of Arsenal really, and Theo and then Ozil could easily have made it the four or five goal smashing that the performance deserved. It really was a very satisfying display, and we'll need the same intensity all over the pitch at Manchester City next week. Now if we could just have a signing or two before then...
Posted by DvbrisG at Sunday, January 11, 2015