A single pass shows the class of Oxlade-Chamberlain 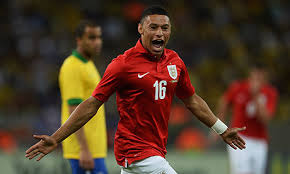 A bit of class

In spite of my indifference towards the sideshow that is international football I have watched both the England matches this past week. I actually attended the Ireland game at Wembley and, much to my own surprise, I quite enjoyed the contest. The press quickly picked on the match and called it dull, but I have to disagree. I thought there were plenty of chances created, especially by England after half-time, and it was a decent game of football as international friendlies go.
Two Arsenal players have been involved in this current England squad and they both had large parts to play in each of the games. In the first-half against Ireland I thought Theo Walcott did okay, but I was disappointed by Alex Oxlade-Chamberlain. After half-time I though The Ox was much improved, while Theo was pretty much the star of the show. Walcott combined really well with Phil Jones and Wayne Rooney (who got stick in the papers for his display – his range of passing in the second-half, from a deeper role, was outstanding). That trio were pretty much at the heart of most of what England did well as the majority of attacks came from that right wing area. Ox really got more involved once Rooney had stepped back and started pinging the ball about as this opened space further ahead for him to run into. Both Arsenal boys should have scored against Ireland but a combination of lacklustre finishing and an excellent display by David Forde in Ireland’s goal gave the Irish a deserved draw.
If I was an England fan, as such, I would be a bit worried after the Ireland game. Let’s be honest they are a third (or even fourth) rate side who should have been swatted by any England team. England also played the game like a proper match, in that the substitutions were kept to the standard three until the final minute when Chamberlain went off with a slight knock. After the game I was listening to Radio 5 (the traffic getting away from Wembley is no easier to navigate) and heard people saying how much Jack Wilshere is missed. Given that Jack has hardly played for England for two years I find such statements astonishing. The fact is, and Gary Lineker can moan about Roy Hodgson’s tactics all he wants, that England’s players are simply not as good as the hype would have you believe.
The Brazil game saw England get a bit of a chasing for an hour or so. Theo missed another chance I would expect him to bury but, had it not been from the best display I’ve seen by Joe Hart, it would have been embarrassing (almost as embarrassing as Ray Lewington’s non-stop screeching at players from the England bench – have some dignity man!) At 1-0 down Roy Hodgson introduced Oxlade-Chamberlain from the bench and in to central midfield. Suddenly England had a player on the pitch with a first-touch worthy of the name and the composure and ability to see and deliver a quality pass. Rooney had someone he could link up with, and Walcott had someone who would put him away down the wing.
One of the features of the first half had been Brazil passing the ball out in front of their runners, all along the ground. England, meanwhile were like park no-hopers. Two or three times Brazil played the ball down the flanks to allow their pacy wide-men to run on to it. In contrast, there were two occasions where England had opportunities to do the same. The first was wasted by Michael Carrick who played it behind Theo and out for a throw-in. The second was by Lampard who inexplicably played the ball at thigh-height towards Walcott and it was easily intercepted. Had either pass been played in the way the Brazilian’s were then Theo was in behind the defence.
When Chamberlain came on the first thing he did with the ball was control it, look up, and then play a weighted pass, all along the ground, out in front of Theo Walcott. It led to a chance on the edge of the box, after Theo pulled the ball back in to space, that came to nothing. As I was watching it I said to my wife “that’s a Brazilian pass”. It was so out of keeping with what the rest of England’s midfield had produced that it stood out so conspicuously. It also marked out the sheer quality possessed by Alex Oxlade-Chamberlain. To then go and score that superb goal just underlined it further. He’s had a tough season this year, but Ox has finished strongly. I think he will be a key performer for Arsenal next season. He will also be key for England – he’s the only player they’ve got (with the probable exception of Wilshere) that could take on the best at their own game and execute a quality pass.