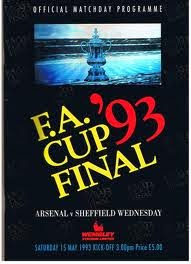 The first FA Cup Final I attended was in 1993. I was two weeks old when Alan Sunderland “beat the f*****g b******s” at Wembley in 1979 and was still considered a little too young attend the following year when Terry Neill’s men succumbed to West Ham towards the end of the longest season ever. I’d already been to Wembley with Arsenal in 1988 to see us throw away the Littlewoods Cup against Luton, then again that August for a 4-0 pre-season win over Spurs and the Charity Shield defeat to Liverpool a year later. Tickets were too hard to come by for me to attend the Tottenham defeat in 1991, but I’d already been to the old place twice already in ’93 for the FA Cup semi-final and League Cup Final wins. By the time we got there again for the FA Cup Final I think Arsenal and Sheffield Wednesday were sick of the sight of one another, though how anyone could ever tire of going to Wembley I could never imagine. 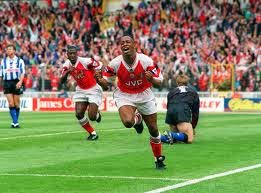 The first thing that sticks in my mind from that Saturday, as with the League Cup Final, was the way we were outnumbered by the Wednesday fans when we went down to their end to see the team bus arrive. With them having to travel from Yorkshire the vast majority of their supporters were there early, whereas the Gooners were mostly jumping on the Tube or whatever to get there. Our vantage point was great to see the decorated cars arriving in the Wembley car-park (ours was also decorated, but parked on a well-off housing estate somewhere behind Brent Town Hall). Our coach was the second to arrive so most of the Yorkshire types had dispersed leaving us to welcome George Graham’s boys at pretty close quarters. The contrast of our red and white flags and shirts against their blue and white has always stuck with me, and I always think it looks great on the video from that day.
We had seats at the front of what might have been termed the “upper” part of the old Wembley terracing, with a wall separating us from those in the seats in front of us. We were directly behind the goal that both goals were scored in that day. I can still remember the reaction to Ian Wright’s opener and the deafening Wembley noise that greeted it. The goal itself is fuzzy to say the least. In truth it was a poor game. Wednesday equalised and there really wasn’t much else of note. I remember a bloke (who sat near us in the East Stand and always seemed a bit of a clown if I’m honest) spending extra-time reading his programme such was the excitement on offer. Pat Rice had taken to the pitch before extra-time began to try and whip up some noise from our end, but it was all to no avail and we had to come back the following Thursday which meant an early start for my Dad (I think on the Monday morning) to get to Highbury and queue for the tickets for the replay (being a replay the “FA Family” weren’t invited which meant 40,000+ Gooners would be in attendance). 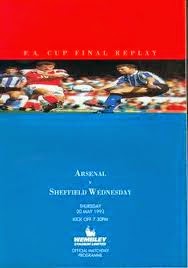 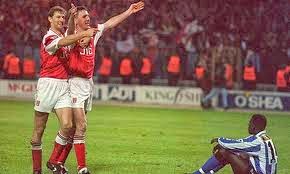 Tony presents the hero to the Arsenal fans

Tony lifted the Cup towards us all and we went mad once more. The lap of honour seemed to last for ages and the players really milked it that night. Most of the attention of the fans was on Linighan, but even more so for David O’Leary whose name was sung long and loud after his last ever game for us. The song that really sticks with me, probably because it’s a bit corny, was “ee-aye-addio we won the cup”. I suppose it had been 14 years at that stage since Arsenal supporters had last sung it and, let’s be honest, it’s pretty catchy once it gets going.
Leaving the ground was something else. Weirdly, right outside our exit was a payphone and we called home to speak to my Mum and our 9 year-old sister who had been entrusted with recording the game on BBC1. When we finally got outside the concourse around the stadium was a sea of red and white with people dancing and singing. We cut across one of the banks and down the steps to try and get across the throng close to where we needed to go to get back to the car without joining the crowds on Wembley Way. Out on the high-street there was more singing. There is (or was) a petrol station just down from Wembley Park Underground that had seen its forecourt taken over by the massed celebrating Gooners who were no doubt seriously worrying the police sitting inside the van that was there. All these things are clear to me, all these years on. 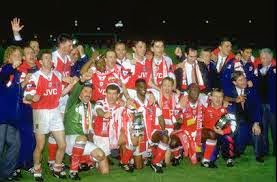 The boys celebrate with the FA Cup

Many Gooners will be familiar with Mad Mickey who was also known, in those days, as “George”. He was a character who went home and away, a guy with dreadlocks and an Adidas Arsenal coat, always carrying an Arsenal flag. We saw him as joined the queue for the tube, and then we saw him again, just down from Highbury Corner as we drove back through North London. Even as we headed towards the turning for the A2 there was a bloke and his little boy with their Wembley flags heading in to a mini-cab office, everyone acknowledging the red and white ribbons on the car. The last “bonus” of the night came in the shape of a terrible traffic jam at the Blackwall Tunnel – getting home at about 2.30am meant no school the following morning!
Posted by DvbrisG at Friday, May 09, 2014