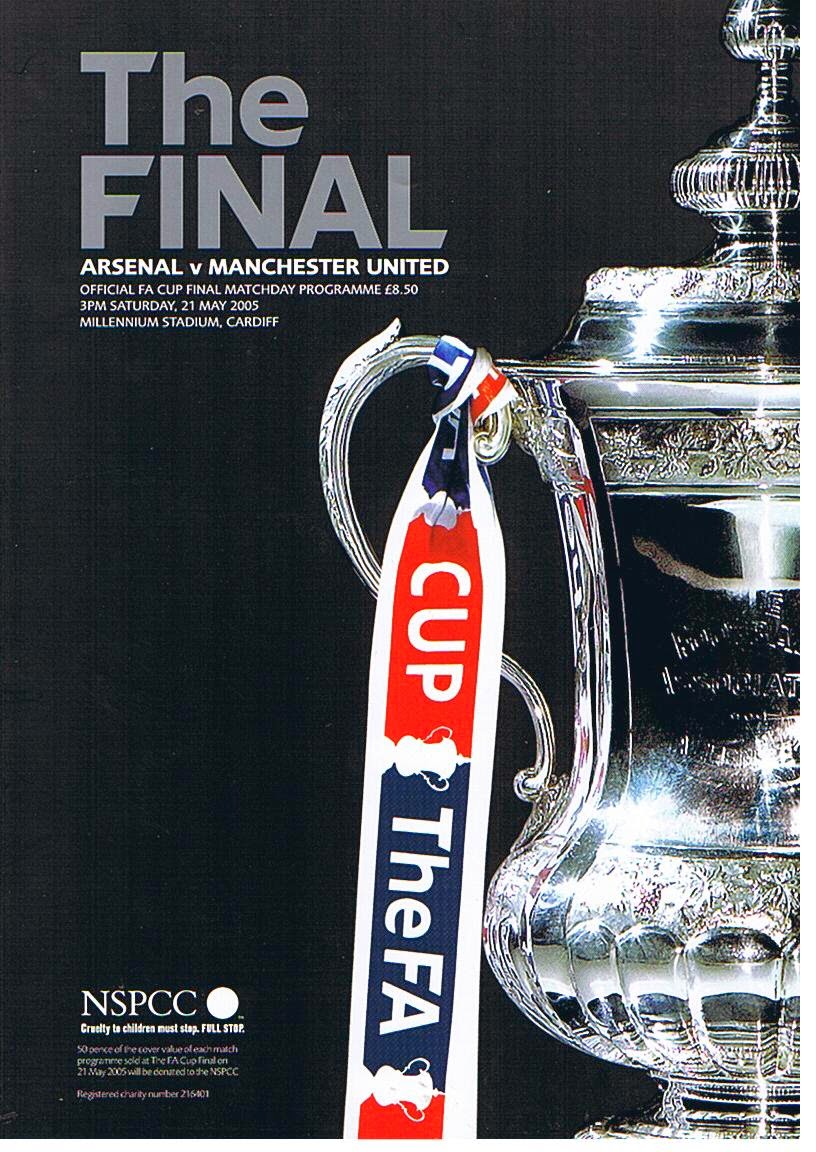 
After a year away we were back in the FA Cup Final in 2005. Our group didn’t take a minibus this year as we hired a people carrier instead. I was the volunteer to drive and we set off shortly after breakfast on the day before the game. As usual the car was decorated in Arsenal colours, the red and white ribbons supplemented by a small amount of yellow to ensure we weren’t confused with the Mancs in any way. The usual beer and brandy was piled in to the car as we headed out of Dover for one final Cardiff away day (actually some of us went to the Charity Shield the following August for one last game in Wales). In the car were Dad, Mark, Gary, Bill, David and Frank. Again we picked up Matthew at Maidstone, while Mick was working in Swindon and would make us a two car convoy half way down the M4. I remember David being mightily impressed that Mark had bought lime with him to add to his beer and describing him as a “pro” when it came to preparation. 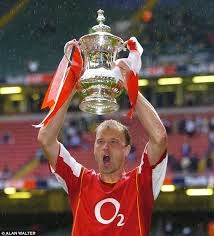 Dennis was inspired by our singing...probably

We got to Membury services without incident and there was the usual round of brandy coffees for the passengers. Shortly after that we hit the traffic. They’d been talking on the radio about road works affecting the M4 and how it would disrupt travel for those going to Cardiff for the game. They weren’t wrong. This was the first time any of our journeys to Wales had been affected by traffic. As the traffic jam wore on we were overtaken by two large Range Rover’s, bedecked in red and white. As we pulled alongside them again I noticed that the driver of the front one was none other than Mrs Bergkamp – the one behind was being driven by Dennis’ father. The horn on the car was sounded many times and the windows put down in our motor as a rousing chorus of “Bergkamp Wonderland” filled the motorway air. Dennis’ wife was on the phone and she held it out of the window as we sang. I can only assume that at that time we were actually serenading the Great Man at the other end of the line. The Bergkamp family seemed to enjoy the attention and it showed how normal they were that they had decorated their motors for the Cup Final as any fan would.
We were stopping in Chepstow, as we had for the Chelsea game three years earlier. Andy, Tony, Sue and Buster were coming up from Cardiff for the evening as we prepared in the usual fashion. Unfortunately I missed all the pre-match drinking. After a couple of pints I was feeling really unwell. I returned to the hotel and slept deeply until the following morning. I don’t know what it was, and it was rare to sleep so soundly before a Cup Final. When I woke up the following day I was fine.
We drove in to Cardiff bright and early, but that was about the only thing that was bright all day. No sooner had we taken up our position by Cardiff Castle than it started to rain. Dad was interviewed by TalkSport, and we tried to recreate my goal at Highbury from the week before for Sky Sports, but it wasn’t a great action replay if I’m honest (God knows where we got a football from). As the day wore on we were joined by a number of familiar faces as a large amount of Dover Gooners had managed to lay their hands on tickets for this game. A long-time friend and Manchester United season ticket holder from Dover also caught up with us before we went in to the ground. To be honest, though, it lacked the atmosphere of the other trips to Cardiff. The weather didn’t help, of course, but there was an edginess to the atmosphere because of the relationship between the two Clubs and the two sets of supporters. There was no element of people seemingly being there just to enjoy the day. United were also just about to be sold to the Americans so their fans were more than touchy to any baiting on that front as well. 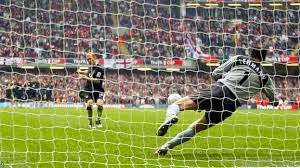 Inside the stadium we had very similar seats to those we’d had for the Chelsea game. What followed was a Cup Final to match our 2001 game with Liverpool in terms of how one-sided it was. The difference was that we were the ones just waiting for the opposition to get the goal their play warranted. With Thierry Henry injured we had the ridiculous sight of Dennis up front on his own. For all his greatness, Dennis was not a target man. At no time in the entire game did our defence get any respite. Ronaldo gave Lauren the most torrid game I’d ever seen him have. Lehmann, Toure and Senderos (Sol Campbell was left out) were imperious at the back, with Vieira and Gilberto working like Trojan’s ahead of them. Chance after chance came and went for United and us fans were suffering. The players didn’t lack for support from our end, but they just weren’t at it.
Somehow, thanks largely to Jens, we made it to extra-time. Robin Van Persie had come on for us and he had our only shot on goal with a free-kick that produced a good save from Roy Carroll. At the other end the chances kept coming. The best opportunity they had fell to Ruud Van Cheatalot with a header from about two yards that Freddie somehow deflected on to the bar. I suppose we should have realised at that point that this would be our day. Jose Antonio Reyes was ridiculously sent-off with about ten seconds to play for two bookings – the second a result of Ronaldo literally running in to him and then going down and holding his face. If you watch the TV replays you can see Reyes’ arm touches Ronaldo in the chest, and the cheating little scumbag lays on the floor looking between his fingers at the referee to see if the card is coming out. We could all see it was nothing in the stadium at the time, but that summed up the referee Rob Styles. The final whistle was blown and somehow we’d survived two hours of being battered by Manchester United. God knows how. 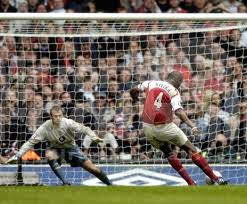 The penalties are fairly vivid to me. None of us were quite sure who would take them with Henry and Pires not on the pitch. Lauren and Ashley Cole were certainties. But Freddie hadn’t really taken  any, Patrick Vieira had missed them in the past (including in a UEFA Cup Final shootout) and Robin Van Persie was very young. Ralph stepping up to take our first, having seen United score, got us off to a good start – top corner. Then it was Jens Lehmann’s time to be our hero. Scholes should have been sent-off during the game for some of the most horrendous fouls you’ll see in an FA Cup Final (he always got away with it) so it was justice that he should have his penalty saved. It’s a weird feeling in a shootout because, until it’s properly over you can only half cheer the goals and saves. In truth our penalties were outstanding. Freddie despatched his to put us ahead, while Cole always put them away for Arsenal. We were nervous when Robin Van Persie stepped up, but he was nothing if not confident – top corner again.

Players and supporters in similar pose

And so it came down to Patrick. None of us knew then how significant this kick of the ball would be in terms of his Arsenal career, and that it would herald our trophy drought. I can see him kicking that ball now. I had the perfect view. Closing my eyes I can see Carroll go the right way, and I’m convinced he got fingers on the ball, but it flew in to the top corner. The Arsenal end absolutely erupted. What a noise. What a celebration. Patrick went straight to Jens who had outrageously been overlooked as Man of the Match in favour of the goalless Rooney. The relief of winning after taking such a beating in the game was unreal. The jumping about and the hugging was as massive as ever. Gary jumped on me and nearly knocked me out! We’d won the Cup again. Nothing beats that feeling of winning something. 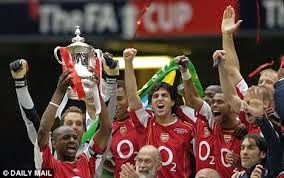 Patrick lifts the Cup to the Arsenal fans

We were all delighted that Reyes was allowed to pick up his winners medal having been sent off so ridiculously by an overzealous referee, determined to make headlines for himself. Then Paddy stepped forward and lifted the Cup. What final act to perform as an Arsenal player. Another great lap of honour was enjoyed by us all. You never tire of those moments. 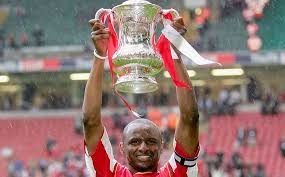 I drove out in to the M4 traffic jams with a very happy car load of Gooners. A Man Utd minibus tried to drive me off in to the central reservation after Matthew had responded to their unprovoked abuse by calling them all w*****s. He wasn’t wrong. Incidents on the M4 after the game had been a feature of two of our Cup Final’s there – some people just can’t take losing, can they? We got back to Dover at gone 10pm and joined in an impromptu drink or three with other celebrating Dover Gooners at my brother’s house. I think I’d earned a lager or two. Who'd have known we still wouldn't have tasted that success again some nine years later? I can honestly say that, because of who we beat and the way we were hammered on the day, this was up there with the very best feelings of them all. 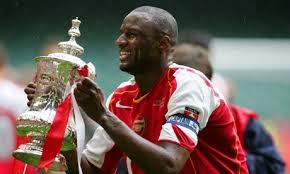 Some of this on Saturday please Arsenal

I really hope you’ve enjoyed my reminiscences of Cup Final’s past over this week. It’s been great fun writing them and recalling the good times we've all had, both at Wembley and in Cardiff. Sadly we can't all be together again on Saturday because of the way the tickets have been allocated. That's a shame that should be highlighted both to Arsenal and to the FA. I'm one of the lucky ones as I will be at Wembley again. I feel, as ever, privileged.

Tomorrow I’ll be previewing the 2014 FA Cup Final so please check back for that. I hope I’ll have a new story to tell by the time I get home late on Saturday night.
Posted by DvbrisG at Thursday, May 15, 2014