A special day - not just for Sanogo 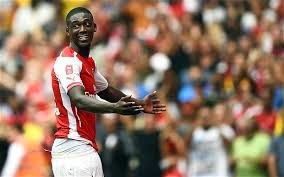 Today was a very special day for me. Forget, for a moment, that Arsenal won 5-1. Today I took my youngest son to his first ever Arsenal game. Was he particularly interested in the game? Not really. The highlight of his day was meeting Gunnersaurus. But the fact that he has been, and that he enjoyed the experience, is the most important thing. He wasn't overawed by the stadium, or the crowds of people, or the noise that such a crowd generates. Having his older brother (who knows just about everything there is to know about the Arsenal players) and his Mum there will no doubt have helped, but the look of wonder and the smile he had on his face at his first sight of the pitch and the stands is the thing you always want. It may well be that I don't take him again until next years Emirates Cup, but that doesn't matter - it will give him another year to really generate a proper interest in The Arsenal. And not many can say they started their watching career with a 5-1 win. It was indeed a great day.
I've had a deep and irrational dislike for Benfica ever since they beat us in the European Cup in 1991. It's been a long time coming, but seeing Arsenal absolutely thrash them today, pre-season or not, was brilliant to me. I hope, if we draw them in the Champions League (let's qualify for it first!) that we don't go taking it easy after today. Pre-season tells us nothing of importance, to be honest, but that doesn't mean you can't enjoy hammering a European giant - lest we forget Benfica should have won the UEFA Cup last season, on top of their domestic treble. 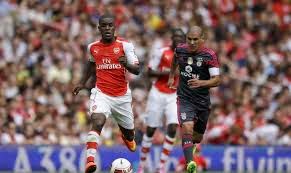 Campbell lit the place up today

Some of the football Arsenal played today, right from the off, was tremendous. Joel Campbell's first involvement in an Arsenal shirt was to beat two defenders with a great piece of skill and then get fouled in the penalty area. The fact that that idiot Lee Mason waved play on meant that it took 100 seconds of the season for me to get irate at a cheating referee - surely a new record. Let's just deal with Mason quickly and point out that the two teams were playing to different sets of rules, it seemed at times, with Arsenal being refereed as though it was a Premier League game (he gave us nothing) and Benfica getting the "friendly" refereeing. I would also note that Mason is at least a stone (and probably more) overweight ahead of the new season and got in the way of the play on two or three different occasions - that is unacceptable from a supposedly top official. Joel Campbell continued to traumatise the Benfica defenders, while Alex Oxlade-Chamberlain gradually got better and better on his return to action.
From the midfield Aaron Ramsey was producing some great stuff and even a decent kicking from the opposition wasn't going to stop him. With Hector Bellerin looking superb going forward (a little weak, physically, in defence it should be said) Arsenal were all over the Portugese. Yaya Sanogo, meanwhile, looked like a stranger to a football and should have scored at least twice before he finally got his first goal in an Arsenal shirt after sublime Ramsey play. That wasn't before Benfica had hit the bar themselves after getting in down our left - Kieran Gibbs spent the entire first-half doing an impression of Kyle Walker as he was constantly out of position, which left Monreal doing the work of two men from centre-half and he did it pretty well it should be said.
Before I get to the good bit I have to say a word or two on the defensive situation. Calum Chambers looked composed, strong and quick today, but the fact that we had two full-backs playing as our centre-halves showed the situation is chronic for us. Injury or suspension to Koscielny and/or Mertesacker and we are in serious trouble (forget Thomas Vermaelen). For all that we've seen a wonderful transfer window so far we are still lacking in three of the main positions we had to deal with last season - we need at least one new centre-back, we need a monster of a midfield player, and we need a genuine goal scoring centre-forward. It is not fair on Monreal to put him in that position, and the fact that he and Chambers were playing ahead of Ignasi Miquel today tells you the young Spaniard has no Arsenal future (if you didn't know that already).
Arsenal's second goal was also a thing of beauty. Campbell had missed one presentable chance after a lovely chip from Ramsey, but he made no mistake when volleying in an inch-perfect delivery from Bellerin. It was a lovely goal and a really good finish from the Costa Rican. He would miss another one shortly after, but I was delighted to see this evening that Arsene Wenger has said he is staying at Arsenal. Playing on either wing he was good today, and clearly wasn't bothered by getting a kick or two. He got a great reception from the crowd and it was well deserved.
If someone had told me Yaya Sanogo would have a hat-trick before half-time I'd have laughed (and I did when he missed his second or third chance of the day, falling over the ball as he did so). Credit to Sanogo as he was in the right place to put the finishing touches to the moves we were putting together. Each of his goals might have been a tap-in, but you've got to be there to score them and he was on this occasion. After the first goal he actually seemed to gain in confidence and looked a little better on the ball at times. Having said that, he has a lot to do to prove to me that he is good enough to play for Arsenal. Is he really better than Chuba Akpom? Not on the evidence of today as Akpom came on again and looked strong, quick and good on the ball (his shoulders visibly slumped when he was pushed out to the wing and realised he wouldn't be getting his chance down the middle). Perhaps the thing that summed up Yaya Sanogo the most today, and could put him in some sort of Perry Groves area of cult status, was the way he fell over while trying to celebrate his fourth goal! 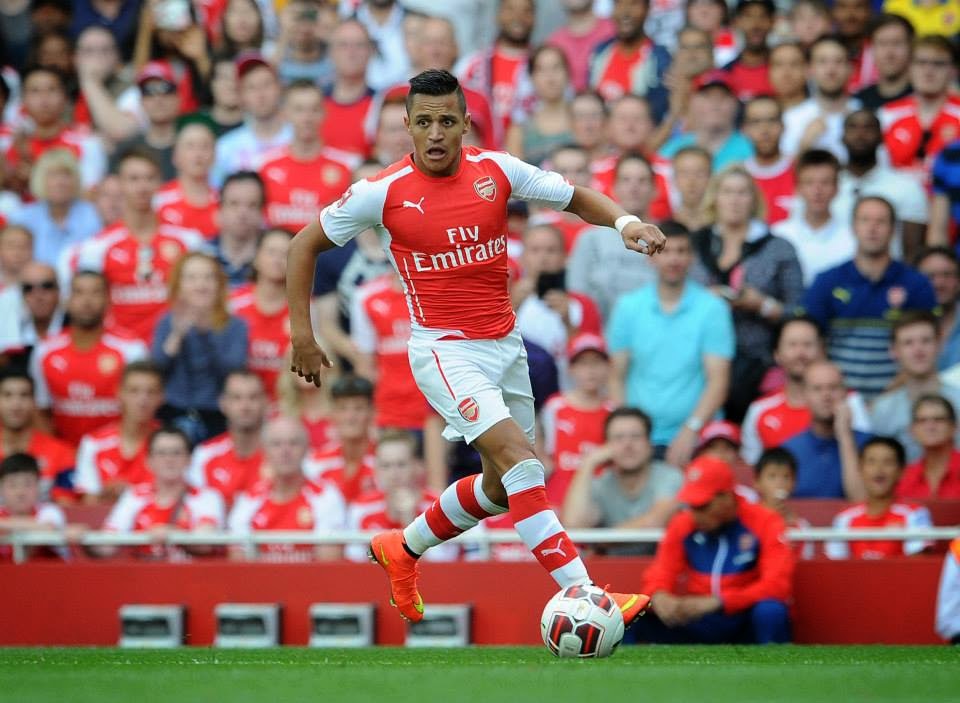 I was worried at one stage that we wouldn't get to see Alexis Sanchez take to the field this afternoon. I was delighted that he did. The noise that greeted his arrival on the pitch was deafening and he showed so many good touches when he came on. I could take or leave the step-overs we saw, but the speed, the runs, the taking people on, the little lay-offs to Jack Wilshere, it was all very exciting to Arsenal supporters. He helped put together a wonderful move near the end which saw Francis Coquelin hit the post, and it would have been a fitting end to a brilliant Arsenal performance. Something I definitely don't want to see too often is the 5'7" Alexis playing as a lone centre-forward. In fairness to him he challenged well in the aerial duel on a couple of occasions but the likes of John Terry might actually hurt him if he gets put in that situation against them. I can't wait to see more of the Chilean, and it all bodes well for some top football to come.

I won't see the game tomorrow until late in the evening. It would take something approaching a mathematical miracle for Arsenal not to take their own trophy this season, so that will be a nice way to start. A few of the other senior players will get a run out tomorrow, including Giroud and Koscielny. Hopefully the crowd there for the Monaco game will get a similar treat to those of us there today. I'll try to write about it on Monday.