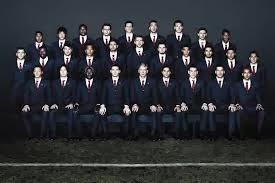 I haven't written a post in ten days. Such is the way with the international break where nothing emerges from Arsenal that is worthy of comment. I only write when I think I have something to say. I think the content of the blogs that operate on a daily basis over the past two weeks tells you all you need to know about that, though it's an art in itself to provide something mildly entertaining with no subject matter to work from.
Before I get in to the detail of Arsenal's international players you will have noticed that I've posted Arsenal's publicity shot of the players in their new suits at the top of this piece. It really is great to see Arsenal's players looking as smart as they should do when representing the Club. I was dismayed to see, following the suits "debut" at home to Liverpool, that the players turned up for the game in Dortmund wearing tracksuits and headphones again. Now that the Club has gone properly public with the sponsorship deal for the suits I hope we see them at every game. One thing that has annoyed me over the last couple of days is the way other blogs and groups are trying to claim some credit for themselves on this. I read a post on another site last night who claimed that they "revealed" Arsenal's players would be wearing suits, and there was a "rumour" that Thomas Vermaelen was behind it, before rubbishing that notion and claiming that Nike may have blocked the wearing of a suit - an idea that is shown to be nonsense by Manchester United's players wearing their Club blazers). As far as the "rumour" about Vermaelen wanting the suits, I wonder where they got that from? Hmm. Almost as bad was a Tweet from a particular supporters group that Arsenal had "listened to the fans" regarding the suits. Let's get a couple of things straight. The news of Arsenal's players wearing suits, and the absolute fact that Thomas Vermaelen demanded it, was revealed exclusively on this site over a year ago. In October this year this site told you, again exclusively, that the Arsenal players would be wearing them by the end of November. Anyone else claiming to have revealed it, or claiming credit for the return of the suit, is talking absolute nonsense.
The international break was rare indeed for Arsenal in that nobody appears to have come back crocked. Not just that but nobody will be fatigued to any great degree either. The only player to be involved in all of both games in the past week was Thomas Vermaelen and, given that he has not played too much this season, that can only have been a good thing. The over worked Olivier Giroud was dropped by France on Tuesday evening, playing only the final ten minutes or so. Bacary Sagna was also a late sub so is very well rested (I met Sagna when he was coming back to England late on Wednesday afternoon and he wasn't overly talkative - I missed out on his autograph as I didn't have any scraps of paper on me). Laurent Koscielny might possible have made it to the second France game (though he might have paid the price for giving away yet another penalty) but his red card ensured he also got the week off. The Germans sparingly used Ozil and Mertesacker (the BFG had already had a two week break before his match winning display at Wembley). Santi Cazorla did plenty of travelling with Spain, but his game time was kept to a reasonable minimum, while Nacho Monreal got a whole game under his belt. For England Jack Wilshere still looks far from fit, despite the protestations of Arsene Wenger, while Kieran Gibbs also got a half-hour run against the Germans. Aaron Ramsey was ill or injured for Wales so he has also had a very welcome rest over the past fortnight. If Arsenal fail to win on Saturday then fatigue would be a very poor excuse.
It might have been preferable to have played again quickly after Manchester United the other week, but the internationals meant that couldn't happen. That being the case, the fact that the players didn't get flogged by some fairly sensible international management is a very welcome bonus. It's fairly rare for us to get out of an international fortnight without moaning and groaning about one or more of our players coming back broken, so this one has been pretty good. The fact that France turned things around against Ukraine can only be good for Arsenal as well. None of our three French squad players is guaranteed their place in the side ahead of the World Cup so they will all be putting in plenty of effort for the rest of this season. If Sagna, Koscielny and Giroud all do well between now and May then Arsenal will also do well. 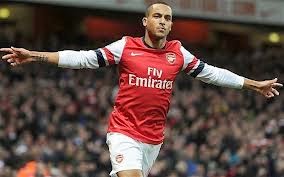 Hopefully plenty of this celebration to come

Who would have thought that Arsenal v Southampton would be a top of the table clash when the season started? Here we are in deepest, darkest November and Arsenal are not the only side who have surprised people. Saints have been fantastic ever since Pochettino took over from Nigel Adkins. I was amazed when Adkins was sacked. It seemed even worse when he was replaced by a fairly unknown foreign boss with a very moderate record in his career to date. Without making wholesale changes to the playing staff he has turned Southampton in to a fairly formidable opponent. There are no stars, as such, in their team but they have a decent mix that suits the way they play the game. Tomorrow will be a very tough assignment for Arsenal.
There had been hopes that the two weeks off would see the injured players magically come back this Saturday. I always find that an odd way of thinking. Do people think that the medical people only deal with the injuries when there's no games to be played? Why should an international break make any difference whatsoever to the recovery of an injured player? I digress, but the sad fact is that only Theo Walcott is ready to return, and that is only a qualified statement in that he has had no football whatsoever in two months. Lukas Podolski is out for at least three more weeks according to Arsene Wenger, while Oxlade-Chamberlain is not likely to return before Christmas at the earliest. As for Yaya Sanogo...
The return of Walcott is a big boost. In his, and Chamberlain's, absence there is a lack of proper pace in the side at times. The very threat of that pace is enough to have defenders worried, and opposition managers setting up to combat it. This often leads to Theo being faced up by two or three players, opening space elsewhere. With the likes of Ozil, Cazorla and Ramsey already in the side you can see where someone is going to benefit from others being double-teamed.
I've given Ozil some stick in recent weeks as he has become pretty ineffective at times. However, the return of Theo could bring the German to life. The only time they had the chance to link up was on Ozil's debut at Sunderland. Walcott should have had a hat-trick that day, and every chance was created by an Ozil pass. If there is one thing Ozil needs it is someone to create for. Theo Walcott could be that person. Something that needs to be made clear to Theo, however, is the need to be making runs in behind. It's no good to Arsenal if he is standing still with his arms out wide demanding the ball, as he so often does when Sagna looks up to see him standing in his way. Whenever the ball is played towards Olivier Giroud, or is at the feet of Mesut Ozil, I want to see Theo looking to get beyond the last man. He is the player with the pace to support Giroud properly, and he is also the player to get on the end of Ozil's creativity. If his presence also opens some space for Santi Cazorla to exploit then Arsenal's attacking players will have too much for most defences in the Premier League.
Of course it's pretty unlikely that Walcott will start the game tomorrow afternoon. What I don't want to see is Flamini and Arteta playing together again, with Ramsey pushed out to the wing. My preference would be for a side like this:
Szczeszny - Sagna, Mertesacker, Koscielny, Gibbs - Arteta, Ramsey - Gnabry, Ozil, Cazorla - Giroud.
The direct running of Gnabry is important as he is willing to take on his man and make something happen. He has already influenced the results at Swansea and Crystal Palace. The young German is an exciting prospect and I want to see him involved more and more. There is no point whatsoever in wasting Aaron Ramsey out wide when you have a lad who can genuinely play there. Gnabry is also willing to work hard for the team and his defending has been a feature of his game. He is physically strong and has helped out his full-back well on occasion. In the absence of Theo he maybe should have been seen more than he has. The other problem with Flamini and Arteta playing together is that it makes us a little defensive, especially against some of the lower quality opposition. It is also an unnecessarily negative move against almost anyone when we're playing at home.
I had a dream the other night that we will lose 3-1 on Saturday. A defeat would be disastrous, as it happens. As well as Southampton have done this season it is a game you must be looking to win if you're genuine Title contenders. It's also important to bounce back from the Man Utd defeat in a very positive manner. We have the busy part of the season just a few weeks away now. Get past Christmas and New Year ahead of everyone else and you have a real chance. Three points tomorrow are a must.
Posted by DvbrisG at Friday, November 22, 2013