Causing a stir, Value for money, Does training wear tell us to expect new no. 4? 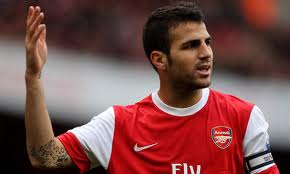 I wonder?
Well yesterday's post certainly ruffled feathers. As I said at the start of it I was offering an opinion, not fact. I remain sceptical about the "running man" (at the very least it is certainly being made the most of by Arsenal's media people) but an acquaintance of mine who is on the tour with Arsenal assures me I am incorrect. He is 100% adamant that the whole thing is genuine. He is out there, I am not, so I am in no position to disagree. However, I have to respond to one or two of the comments left on the site yesterday. Firstly there is the person who told me to keep my opinion to myself - I would suggest a website called "It's MY Arsenal Opinion" might give you a clue as to the viewpoint from which stuff is written. Then there's the chap who told me I "couldn't be more negative." Now I admit that positivity towards things is not my default position, but the previous two posts published had certainly been positive in nature towards Arsenal. Finally there was "Darren Krogh" who helpfully told me to "support a different club." Well, Darren, I've been going to Arsenal for thirty years, I think I'll stick with them if it's all the same to you. Worst comment of the year. Let's move on, shall we?
I considered going up to Borehamwood today with my sons to watch the youth team. The wife has been at work and the weather not so great here on the coast, so I thought a trip to Hertfordshire might be nice. I couldn't believe it when I looked up the admission prices, however. Borehamwood wanted £12 for adults and £6 for concessions. That being the case it would have cost me £24 plus diesel to watch an Arsenal team without even any fringe players in it. I have to say that is ridiculous pricing.
Instead of going to Borehamwood I decided to take my eldest to watch our local side in action. Dover Athletic were playing Hornchurch at Crabble and were charging £5 for adults, while under 11's were admitted free. I don't care what level you're playing at (Dover are a Conference South side) but that is exceptional value for an afternoon at the football. The official attendance was announced as 314 but I reckon they must have counted everyone twice. Given the pricing policy they've adopted this pre-season (season ticket holders get in for nothing, I believe) they deserve far more through the turnstiles. The football wasn't great quality, and the style of play for both teams lacked imagination, but that's not really the point. I hope Dover can get off to a decent start and get plenty on the gates - they have some people working very hard up there and that work ought to be rewarded. Having said that, it will be £12+ when the season gets started, and I'm not paying that to watch non-league football.
Arsenal announced a couple of weeks back that Abou Diaby had changed his squad number from 2 to 24. It's rare for the Club to make such announcements early on, and even the transfer gossip maker uppers couldn't come up with a reason for it. Nothing else appeared to have changed. Per Mertesacker, for example, remained at number four and was carrying that number on the front of his training kit: 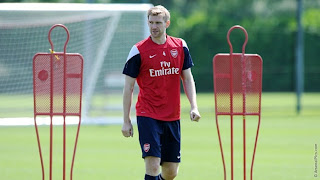 Per wears number four
Of course, this week there has been the bid from Manchester United for Cesc Fabregas. Arsene Wenger then was forced to admit Arsenal have a first option clause on Fabregas should Barcelona decide to sell. This has sent the media and fans of both sides in to overdrive. My thoughts on Fabregas are that I dislike him for the way he forced his way out of Arsenal. It was despicable behaviour, and I wrote here on a number of occasions that Wenger should have publicly stripped him of the Captaincy (Wenger never had the bottle to do that). It would have to be a repentant Cesc Fabregas that returned to Arsenal and found favour with me. However, there are plenty of Arsenal fans that really worship at the altar of Fabregas. I'm sure they're a bit mad, but each to their own. But Arsenal, it seems, have added fuel to the fire today.
It could be that someone in Japan is bored and has decided to play a game with everyone, but Per Mertesacker took to the training pitch today wearing the number 2 on his training kit: 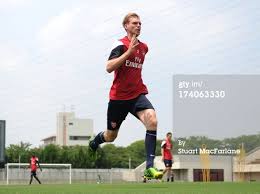 
If the BFG has changed his squad number it hasn't been announced by Arsenal. However, it's unusual for the players to wear a number in training that differs from their squad number - especially when they wear different sized clothing to everyone else on account of being 6'7" tall. If Mertesacker has moved number that would leave number four free. And we all know who wears number four, don't we? Despite my reservations about having Fabregas back, I would far rather have him at Arsenal than not have him. Even more I'd rather have him at Arsenal than see him playing for Manchester United. I hope Arsene is ready to step in if he has to.