How to fit in Theo (and others)? 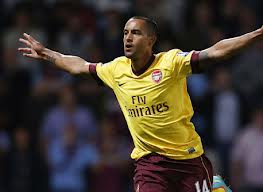 
I have to start tonight's post with an apology. I'm afraid that I have been dishonest and I have broken a vow. I'm ashamed. You might remember that I said I hated the Arsenal away shirt. I still do. I also laughed at the obvious fact that hardly any of them appear to have been sold, such is the absence of purple and black at Arsenal matches. However, the death of JJB Sports has seen said monstrosity suddenly become available at a cheap price. In the interests of keeping up my collection of Arsenal replica shirts I have succumbed and I have purchased the most disgustingly horrible Arsenal shirt in history. In fact I am wearing right now as I type this. I'm sorry for my failure to keep my word, but I suppose we're all weak in some ways.
Right, enough of that old space filling nonsense and on with the reason for this post. We all know that Theo Walcott has been telling us that he wants to play at centre-forward. With four goals from his very limited pitch time this season he has been stating a reasonable case. However, as long as we play with just one striker there is no way that Walcott can be the man to play there. Sadly he is simply not blessed with the physical abilities to play up against two central defenders. Can you imagine what Terry and Luiz or Ferdinand and Vidic or Shawcross and Huth might do to him? Arsenal would be playing with ten men in most games. I don't honestly believe that such a move has anything to do with Walcott's failure to sign a new contract but all the time he is not getting his chance there he has an excuse other than money. With Gervinho being given his opportunity in the middle, and often taking it, it must be hard to Theo to watch after six years out wide. If he was to put pen to paper then I am convinced he would find himself back in the mix for a starting place at Arsenal, and the final ten minutes at West Ham might just have given us a pointer to his future if he stays.
Once we went 3-1 ahead on Saturday Arsene Wenger brought on Laurent Koscielny and we played with three centre-halves. On this occasion it was very much a defensive move as the two full-backs had to play to the situation of the game. It also became a 5-4-1 with Giroud remaining alone up front. However, the deployment of the three central defenders could see us moving to play two central strikers if Wenger was adventurous enough to do something different. I'm not for one minute advocating a change of formation simply to suit a player as limited as Theo Walcott, but I do believe it would make us more solid at the back, as well as making it harder for the opposition defence to handle us going forward. The midfield would be largely unchanged in terms of the dynamic it currently has. How about this for a starting eleven:


Szczesny
Mertesacker - Koscielny - Vermaelen
Sagna                                                          Gibbs
Arteta - Wilshere
Cazorla
Giroud - Podolski
Subs: Mannone, Gervinho, Walcott, Chamberlain, Diaby, Djourou, Coquelin
For me this would make the best use of the players available to us. There is an argument that we would become too narrow, and maybe too easily overrun in midfield. However, if the two full-backs are used properly in this system then they bolster the midfield effectively, as well as providing the necessary width. With the three centre-backs it would also mean we were less at risk of trouble from the defensive deficiencies of our various full-backs.
Arsene, of course, has never been a fan of three centre-backs. For that reason I see it as a very unlikely scenario. However, there would be no harm in seeing this happen in the odd game, at least. Who knows, it might just make us a little bit harder to play against as we would be far less predictable. How many times have we seen the opposition strangle us by playing a flat back 10? If we suddenly had two up front, the centre-halves of our opponents might not have such an easy day, and our wayward crossing would have more chance of finding a friendly target. We would also see Olivier Giroud getting the support he needs, as well as deploying a system where almost everyone is interchangeable, including other squad players like Ramsey, Frimpong, Arshavin, Rosicky and even Chamakh.
When we win the European Cup by confusing the hell out of Barcelona with this system at Wembley next May you can all come and thank me.            ﻿