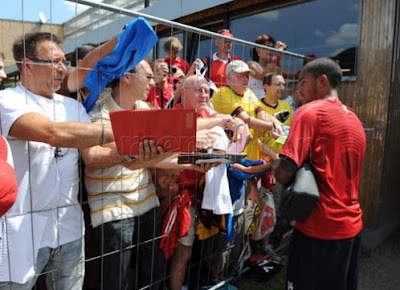 Arsenal landed in Austria at 6.35pm last night and were met by the usual pre-season Gooners at the airport. Denilson and Eduardo are not there. Rumours now abound that Eduardo is on his way out and his absence from the tour seems to confirm it. But what of Denilson? There is no news of a potential transfer, nor of an injury. I must task my spies in the camp with finding out an official line! Training started today, and Sagna, Clichy and Wilshere signed my shirts for me, as per instructions given to those present - excellent stuff. The boys play Sturm Graz tomorrow night, which will be a very stern test so early in pre-season.
There were some youngsters included in this years squad, as usual. The lucky ones this time are Henri Lansbury, Jay Emmanuel-Thomas, Craig Eastmond, Havard Nordveit, Emmanuel Frimpong and Conor Henderson. All four goalkeepers are present, while Aaron Ramsay and Nicklas Bendtner are still injured. From this we can assume that Arsenal careers are over for Jay Simpson, Nacer Barazite (both of whom played at Barnet), Mark Randall and Gavin Hoyte. It will be interesting to see which of them get a game for the reserves tonight at Crawley Town - £14 for standing, hardly value.
I notice in the pictures that Carlos Vela is wearing a training top with number 12 on the front - his squad number is now number 11, which seems to put to rest any idea that he will be leaving. Robin Van Persie has been confirmed as the new number 10 at Arsenal. Good. It never looked right on the back of William Gallas. As for which, if any, of the youngsters on tour get rewarded with a first-team number remains to be seen, though I think Lansbury and Eastmond may get lucky in this regard.

Anyone logging in late last night will have seen my comment on yesterdays blog that the signing of Per Mertesacker is a big rumour going around the training camp, and he is expected to be an Arsenal player at some time in the next week. If this is true, then you heard it here first. Mertesacker was part of the successful German team at the World Cup. Regular readers will know that I really liked the Germany team and how they played. I am extremely happy that we are getting linked to a BIG centre-half (Mertesacker is 6'6" I believe). However, from what I saw in South Africa, Mertesacker is a giant who doesn't use his height. He is not one to attack the ball in the air - witness his failure to get anywhere near crosses in the last couple of minutes against Spain in the semi-final, when deployed up front. Overall, I think I would be pleased with his signing, but would want to see him prove me wrong in a big way.

Arsenal announced yesterday that the stands are to be renamed at Ashburton Grove. We will, at last, have North Bank, Clock End, East Stand and West Stand. This puts me back in the East Upper, where I belong. I'm really looking forward to the Blackpool game and the first renditions of "We're the North Bank/Clock End/East Stand, Highbury". All credit to Arsenal on this one and, in particular, to Ivan Gazidis who seems to realise that fans are actually quite important to any football club. This is something his predecessor, Mr Edelman, seemingly refused to accept, and chose to, it appears, lie to fans about the reasons things couldn't be done to "Arsenalise" the new stadium.

Finally today, Joe Cole. I am disappointed that he didn't sign for Arsenal. Around 6 weeks ago this appeared a done-deal, with every message board awash with people who "knew someone, who knew someone, who was friends with Joe Cole's mum's gardener" and it was a certainty. Clearly it wasn't. The fact that Joe Cole has signed for Liverpool makes it clear to me that he was only interested in money - why else do you join a club outside the Champions League, when offers are apparently there from two clubs (Arsenal and Spurs) that are in it? The only thing in all this that has amused me is that he didn't go to Tottenham, despite Harry and his public pursuit. Redknapp has been in the papers every week for the past month-and-a-half talking up Joe Cole and how much he'd like to sign him. I think Harry was so sure he would get him, especially having had Cole at West Ham. This is exactly why Arsenal stay quiet on transfers until they're done. Egg on your face Twitchy - you've made my day.

More tomorrow evening, after the game in Graz.
Posted by DvbrisG at Tuesday, July 20, 2010